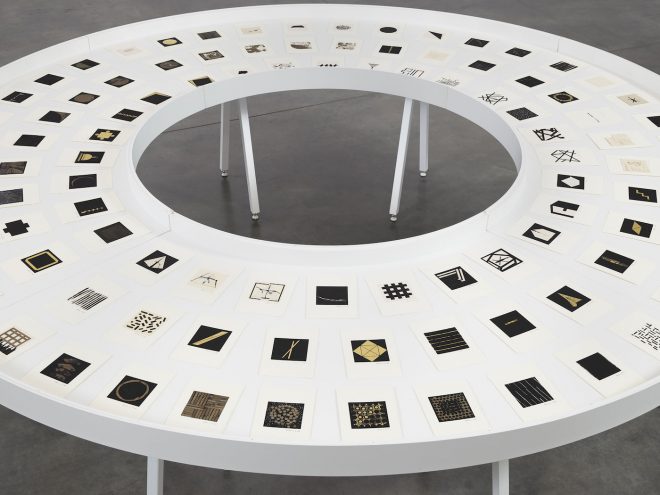 An Artist’s Soul, Out at Sea

Zarina’s collages evoke the intense yearnings of a migrant in search of a home.

Wrinkled paper that evokes a forest. The moon and its shadow. Paper boats.

In the current show of Zarina’s collages at Luhring Augustine in New York, the cosmic and the granular perform an exquisite dance, inducing a hypnotic, devotional hymn to the universe, and all that exists within it.

While Hilma af Klint’s powerful abstractions at the Guggenheim New York write a new subtext for art history, Zarina’s intimately scaled exhibition treads a similar terrain of spirituality and subjectivity. Encompassing 24 works and a large, circular vitrine with 100 miniature collages titled “The Ten Thousand Things III” (2016), the show presents a distinguished selection of the New York-based artist’s minimalist abstractions from the past decade.

Together, they reveal a gathering storm: an artist restlessly in search of a new idiom.

Zarina, who goes by her first name, is something of an enigma. Born in pre-Partition India to an educated Muslim family, she started traveling soon after her arranged marriage to Saad Hashmi, a diplomat. She didn’t go to art school, but discovered printmaking accidentally while in Thailand, where she learned how to make woodcuts. Back in Delhi, she met Krishna Reddy, the famed printmaker, who was to become a lifelong friend (he died earlier this year in August, in New York).

She dreamed of studying at Atelier 17 in Paris with the renowned printmaker, Stanley William Hayter. By fate or coincidence, her husband was posted to the French capital after Delhi. There, at Atelier 17, she learned intaglio and etching. More importantly, she discovered abstraction. This was the late ‘60s, and Paris revealed itself to her through art. She also found Constantin Brancusi and Kazimir Malevich — influences that resonate strongly in the current exhibition — and read Jean-Paul Sartre and Simone de Beauvoir.

Back in Delhi two years later, she got her own studio and started making her own work. She didn’t have woodblocks, so she picked up old pieces of wood wherever she could and repurposed them for carving and printing. The bastion of brush-wielding, predominantly male artists in Delhi didn’t consider her an artist. They were interested in painting, politics, and secularism. She was interested in craft, memory, and abstraction.

The artist arrived in New York in the 1970s. She had long separated from Saad, although they remained married until his sudden death in 1977. She soon produced a sublime series of pin drawings (1975–1977), in which she used a sewing pin to repeatedly puncture a white sheet of paper. The geometry of these works reveals the influence of Islamic art and architecture, with its foundations in pattern, symmetry, and design harmonies. The repetitive gestures have the ritual inflection of a prayer.

Zarina’s work evokes the intense yearnings of a migrant in search of a home. One imagines a soul out at sea, unmoored, but always guided by the divine light of the North Star. She makes maps, borders, homes, floor plans, rooms; she recovers things she has lost through the act of carving, etching, printing.

Her deeply felt work and poetic sensibility have made Zarina a cross-generational icon among artists from South Asia and its far-flung diasporas. She worked in relative obscurity for much of her career; a well-kept secret amongst those who knew and admired her; a heroic figure for a few of the art world’s stalwarts. Then, when postcolonial debates started to peak in New York in the early aughts, it placed displaced subjects from former colonies at the center of their own narratives. The artist, with her lyrical meditations on migration and loss, is perhaps the perfect spiritual emissary for perspectives on exile and displacement.

“The Ten Thousand Things III,” the magnum opus in the show, is the third work in a series that was inspired by Marcel Duchamp’s Boîte-en-valise, or a box in a suitcase, a portable miniature monograph including 69 reproductions of the artist’s own work. Zarina’s equivalents are miniature copies of works she has created over the course of her career, a portable index of her life. They include ruminations on home, place, architecture, cosmic and celestial happenings, sacred geometries, correspondences with her sister, war and refugees, language, Urdu poetry, and faith. (The first of these was made for a Guggenheim retrospective, Paper Like Skin, in 2013).

They feel like small talismans from a different time. There is a delightful sense of spirited play, of reinvention and experimentation that unravels as Zarina unpacks her own vocabulary of mnemonic forms. The work is rife with references to Islamist architecture, decorative motifs and geometric patterning. There is a rubbing of a page from the Koran.

I am particularly moved by the artist’s use of black. Her work has always been minimal in its formal sensibilities, with a symmetry between light and dark. But in this show, the darkness spills over to reveal the light within. In a curious, untitled wall-hanging work from 2017, a tiny, golden triangle is affixed to the center of a black circle made with crushed paper and sumi ink. In Tantric symbolism, a black circle with a central triangle translates to the Goddess Kali, the deity that controls the cycles of time, and delivers moksha, or liberation from rebirth.

This work unveils an exciting syncretism in Zarina’s expansive range of expression. She has always been associated with Sufism, the spiritual dimension of Islam that is concerned with direct personal experience. Sufis hold the world in awe, and manifest its magic in poetry, music, and dance. Zarina is, undoubtedly, the Sufi poet of minimalism; but her abundant use of black, and its evocation of deep space, oftentimes with golden glimmers that channel an ethereal deity, strongly recall Hindu yantras — geometric diagrams used as aids in tantric worship. Her work is both secular and sacred; it foregrounds spirit over matter; life over material.

The spirit of Malevich is not far off, either. Malevich may as well have read a Sufi manifesto, if such a thing existed, when he inscribed the “supremacy of pure feeling and perception.” Black harnesses something primordial, occult and mysterious for them both. Malevich’s Black Square (1915) was a “zero-point” for painting. Zarina’s elemental geometries provide a diving-board for deep religious experience.

For more than 50 years, Zarina — who is 81 — has tended naturally towards paper for its technical malleability and expressive potential. She’s used a wide variety of paper- and printmaking techniques, including silkscreen, cast paper works, etchings, lithographs, and woodblock prints. The collages in this show combine handmade paper, sumi ink, gold, pewter leaf, and assorted, repurposed scraps leftover in her studio. The predilection to “use up” imparts a sense of pathos, of a life inverted, in order to consider mortality. But Zarina’s work, even while it laments and dirges, is always, first and foremost, a celebration of life.

While her last exhibition in New York, Dark Roads (2017–8) at A/P/A Institute, New York University, focused on the politics of migration, displacement, and refugees, the exhibition at Luhring Augustine guides us towards a more poetic reading of Zarina’s works. I would argue, however, that the outward simplicity of her work belies complex registers of allegory and metaphor; the personal and the political are so inextricable that to see each as separate entities is to detract meaning from the other.

(An excellent book, Directions to My House — a firsthand account of Zarina’s life compiled by her longtime studio assistant, Sarah Burney, and published by A/P/A Institute to accompany the exhibition there — provided many of the biographical details for this review).

What resonates much more strongly in this show are the evocations of cosmic happenings, abstract and natural phenomena, and architectural details. In a wonderful collage, “Beyond the Stars” (2014), Zarina’s customary formal precision gives way to fluid systems. For a moment, she loosens her grip on the grid. The night explodes with stars. Golden blots made of 22-karat gold leaf punctuate the inky, black sky like comets from a distant galaxy, and spill over, out of the frame. Spiritual depth finds expression in willful play. A caption below the image, in Urdu, reads “There are other worlds beyond the stars” from a poem by Iqbal.

(Although Zarina was already interested in math and architecture, structures and systems, her formalist grid owes a debt to Agnes Martin, whose work she discovered in the 1970s, in New York. Interestingly, Martin’s method and style of abstraction was strongly influenced by ancient belief systems from the East, most notably, Taoism and Zen Buddhism).

There is a beginning too. The most spectacular work in the show, called “Starting Over” (2016), is also the barest. Two sheets of crushed Indian paper, pasted together on a warm tone buff paper, form an uneven horizon line where they overlap. I stood in front of this work for a while, in awe. Here is Zarina’s “zero-point”: the moment at which all images have been absorbed, revealing the creases of age ready to rebirth itself with entirely new forms. There is nothing; and yet, there is everything.

The work affirms the artist at the height of her expressive powers. She’s right there, standing on the precipice, looking over the edge into an abyss.

“Silent Night” (2017), the first work one comes upon in the gallery, hanging on the anterior wall, is also the latest work, chronologically speaking. It’s an image of a curious totem of 11 coins made through rubbing. The totem forms the number 1, a straight, vertical line. It’s interesting to note that in ancient systems of numeration, whether Roman numerals or the Hindu-Arabic system, from which European numbers later derived, the number 1, is always a version of this straight, vertical line. Minimalism, if viewed through this lens, could take on radically new meanings.

The coins spell, in Urdu, “Praise be to Allah.” Zarina is not an Indian, not American, an in-between, an exile. Her life has been everywhere, all at once. In many spiritual traditions, be it Sufi or Tantra, the ultimate lover for the seeker, is God. In many monotheistic religions and systems of faith, the number 1 is a symbol of unity, symbolizing God or the universe.

Read in terms of currency, perhaps Zarina proffers spiritual currency as the highest form of human exchange, rather than the Capitalist nightmare we are trapped in, in which the Golden God is Money, and we are all its lowly subjects.

These works are lyrical, sublime, and transcendent. They communicate the ecstasy of inner experience, the esoteric vibrations of spirit; especially if one stays still long enough to savor the silence in which they are shrouded. Within the vast quietude of Zarina’s interior worlds, there are words, verses, meaning. These works are not the remnants of a psyche emptying out, but the complete embodiment of existence, with all its echoes.

As always, with Zarina, there is grace.

Go to the original at Hyperallergic.com here.