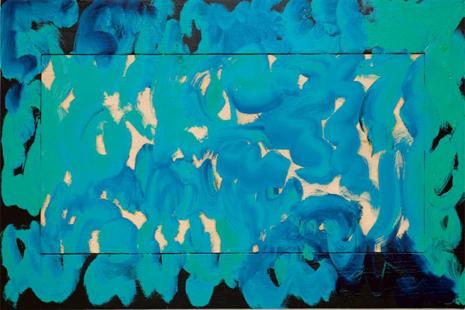 His work ‘Britannia, Bombay’ which will be displayed at his forthcoming exhibition in Mumbai

A contemporary artist meets the legendary British abstract artist ahead of an exhibition of his works, inspired by India

Britain’s most distinguished living painter may be Howard Hodgkin, but his first visit to India in 1964 is memorable for a humble detail—by a series of chances, he spent his first night on a railway station platform. He doesn’t remember where it was, but the experience, he implies, planted the seed for a lifelong love affair with the sub-continent that has intensified with time.

Since that fateful evening amid the warmth—and curiosity—of strangers, 82-year-old Hodgkin has returned to the country many times, as a tourist and traveller, transforming his sensations into pigment with each journey. The artist’s richly hued paintings, inspired by India, are part of a forthcoming exhibition at the Jehangir Nicholson Gallery, Chhatrapati Shivaji Maharaj Vastu Sangrahalaya (CSMVS), Mumbai.

I arrive at the posh suite of the Taj Wellington Mews in the upscale Cuffe Parade neighbourhood, where Hodgkin is staying with his partner of more than 20 years, the music writer Antony Peattie. Peattie shows me around the living room, where six new paintings by Hodgkin hang on the walls. One painting is so fresh that an impervious brown stroke across its surface glistens. Another, with broad coral red and lemon yellow horizontal streaks, depicts a Mumbai sunset. This is the most literal work in the set. In an adjacent room that has been turned into a temporary studio, hangs Britannia, Bombay, the largest of the paintings. Joyous squiggles in vivid turquoise dance across the surface and continue on to a black, wooden frame. A pale flesh-coloured tint fills the negative spaces. Hodgkin, I am informed, has been busy painting them for the show.

A swish of colour in a Hodgkin painting is premeditated and precise, like an arrow drawn for an emotional target. To the unaccustomed eye, the miniature abstract paintings on view can appear as incomprehensible as a couple of brushstrokes on a surface, hurriedly done. To my eyes, they are the masterstrokes of a painter assured of the economy of his chosen language.

I think of Henri Matisse’s late- period collages, the daring synthesis of pure colour and form; and the peerless J.M.W. Turner, whose final landscape paintings predate modern abstraction by more than a century. A painter of the sensory world myself, I am well aware of the difficult task of making paintings that can’t be talked about, especially in a contemporary art world inveigled with words. Paintings that are borne of the senses have to be experienced through the senses.

Through the glass partition of the luxurious suite that leads to the balcony, I see a slightly stooped Hodgkin, gazing quietly at a spectacular urban view of south Mumbai. Peattie leaves me to look at the paintings while he fetches the painter, who is mostly wheelchair-bound and needs assistance to move around.

Moments later, I am seated across from him, surrounded by his creations. A large, burly man with cropped white hair, it’s Hodgkin’s pale blue eyes that are his most prominent feature. Truth be told, I have felt a secret fellowship with the painter ever since I encountered his work at a solo exhibition in New York many years ago. Albeit removed two generations, my admiration has only grown since. Even more so because I discover the artist is reticent when it comes to talking about his work.

“I don’t know how my paintings come about,” he says in a deep, gravelly tone. “It’s important to me that the process these paintings go through remain secret to them.”

I am not despondent—in fact, I’m delighted in a way only another painter of a similar disposition can be.

Hodgkin’s paintings from the 1940s and 1950s exhibit a more direct correlation between the subject and their painted form, to reveal a painter grappling with major European tropes of modern painting. From the 1960s onwards, there’s a gradual distillation of recognizable forms to discrete gestural marks and reduction of colour to pure sensation.

The artist, who represented Britain at the Venice Biennale in 1984 and won the Turner Prize the following year, is not an abstract painter in the conventional sense. Although the paintings have the appearance of abstractions, the subjects are specific to intense memories of people, places, situations and things. Human encounters, by his own admission, have engaged him most deeply, as have “unfortunate love stories, failed marriages and awkward dinner parties”. Freed of the anxiety of description, Hodgkin’s paintings have become, in his words, “relaxed and straightforward and simple”. Simplicity should not be mistaken for ingenuousness, however. Each painting can take years; the pain and pleasure of painting are still vital for the painter, who realizes he doesn’t have much time left. “Strangely, the older I get,” he says, “the easier I find it to produce an emotional punch to my soul.”

Britannia, Bombay, his latest painting, and evidently the one he’s most excited about, evokes the atmosphere of the eponymous restaurant in Ballard Estate, an old Iranian diner with the most delectable berry pulao. “Have you eaten there?” Hodgkin enquires eagerly. Of course, I have—many times. A childlike effervescence lights up his face, and it’s hard not to indulge him on the topic.

He laughs easily about the “remarkable place” and the “old man proprietor” who asked him “to give Prince George a kiss for him”. The story behind the painting doesn’t give away anything about the work itself, but is key to understanding the laconic artist’s approach to painting. In the realm of the senses, anything is a subject as long as it has an emotional charge. Hodgkin isn’t concerned that others may not see what he sees. “It’s all there,” he says, and leaves it at that.

India has played an important role in his work. A prodigious collector of Indian miniatures, he was fascinated with the country even before he arrived on its shores for the first time. Hodgkin found a great travel companion in his friend Robert Skelton, former keeper of Indian paintings at the Victoria and Albert Museum, London, who was just as fascinated with India as he was. “We spent all this time making imaginary trips to India,” he says. “Finally we made a pact that whoever got to India first, would make sure the other one did too.” A trip to Rajasthan with Skelton and a wealthy industrialist’s wife exposed Hodgkin to a world completely unlike his own. “I can’t paint without a subject,” he tells me. “Coming to India gave me many subjects.”

Audiences in Mumbai will have a chance to view a concise body of the artist’s works. In a joint effort with the Jehangir Nicholson Art Foundation and Tate of the UK, the CSMVS will hold an exhibition of 20 paintings and gouaches by the artist. What brings these works together is that they are all about India.

Sharmistha Ray is an artist based in Mumbai and New York.

Go to original article on Livemint.com