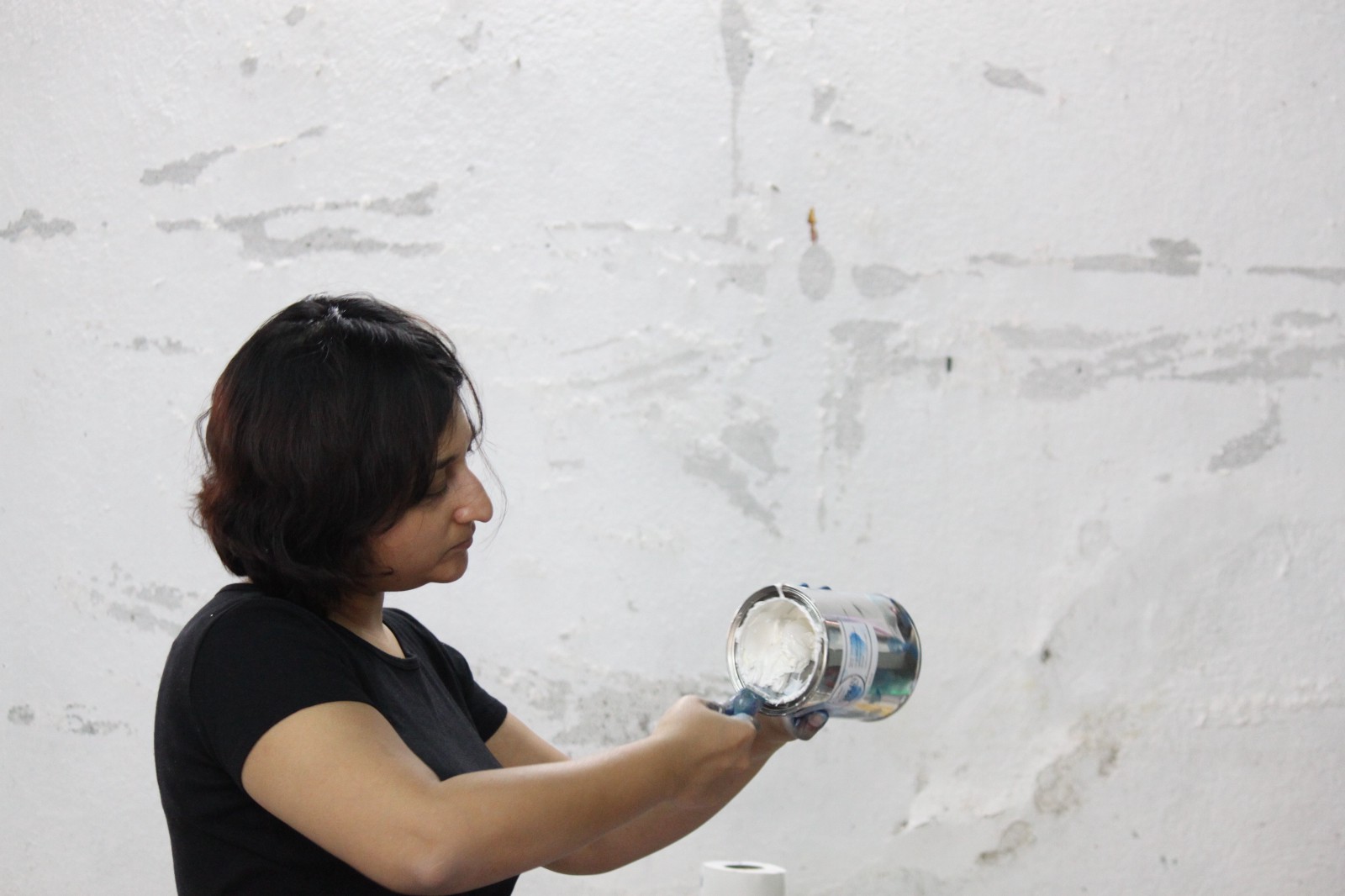 In India, Choosing a Hairstyle is an Act of Social Revolt

Trying to fit in with society’s strict gender norms devastated my sense of self. Here’s how I went from Bollywood to Andy Warhol to finally find the real me.

Long. Short. Wavy. Straight. Easy, right? Wrong. Over the ten years, I’ve lived in India, I’ve come to realize, in some personal and very painful ways, how deeply socialized “hair” is — especially for women. Every woman here seems to have the same hairstyle: long and dark, preferably straight and layered. Currently, Deepika Padukone, the wavy-wonder of Hindi cinema, is the hot favourite to emulate.
Me, I’ve almost always worn my hair in a short, low-maintenance crop with the odd-colored shade of red or blonde highlights every few years. It’s the opposite of the standard Indian-woman look. Feminine constructs for hair aren’t specific to India, of course, but here, the feminine aesthetic is strictly binary and coded — and dogmatically enforced by society. As a visual artist focused on gender and sexuality from India but who has also lived outside of it, I now understand that the freedom to do what one likes with one’s hair is implicit in the struggle for emancipation from social bondage.

To read this While it’s hard to point a finger at anyone cultural source for creating such a limited palette for female expression, one need not look much further than Bollywood for popularizing and perpetuating rigid male-female gender stereotypes. Religious beliefs also play a role: for the practising Hindus, Sikhs and Muslims constituting the majoritarian religious demographic of India, human hair has spiritual significance. Religious and social codes governing how we wear our hair are indelibly linked to civil harmony — and the subject of female hair is a loaded gun capable of setting off more than friendly fire when these codes are breached.

I found this out the hard way. A decade ago, after finishing graduate studies in fine art and art history at Pratt Institute in New York City, I made a conscious choice to live in India, almost on a whim. I was in my late twenties and decided to go back to the country of my birth to set up a painting studio in Kolkata, where I had extended family. It was to be the start of my bohemian romance with India, an adventurous rhapsody in the motherland. But the rose-tinted shades came off immediately. On a daily basis, I found myself fielding passive-aggressive comments and inappropriate questions about my way of life — unmarried, living separately from my nuclear family, and pursuing a creative life — as it deviated sharply from the norm for most Indian women. At this point, I wore my hair in a short buzz cut, never applied makeup, and couldn’t recall the last time I had a facial, manicure or pedicure.

“One need not look much further than Bollywood for popularizing and perpetuating rigidly binary, male-female gender stereotypes.”

On one particularly traumatizing occasion, a government officer from the Foreigner’s Regional Registration Office paid me an unsolicited visit. I’d registered, as was the rule, after a 6-month stay in India on my Person of Indian Origin Visa. For 45 minutes, he tried to solicit me for the upper-grade flesh trade with local businessmen, giving me advice on how I could make myself more sexually attractive to the opposite sex by growing my hair out and losing some weight.

I suppose he thought that I was naïve because I was “fresh off the boat” from America, living alone with my octogenarian paternal grandmother and her septuagenarian housekeeper. The fact that I lived in one of the best neighbourhoods in Kolkata made the transgression even more brazen, highlighting how randomly and often single women are targeted and preyed upon. I eventually managed to get rid of him with a small token of money, but I kept proof of his visit and the text messages he sent me.

While all this was galling, I did, for a time, decide to embrace the Indian feminine ideal, despite my preferences and beliefs. I grew my hair out to look like Everywoman — I also grew my nails and started painting them, lost tonnes of weight, wore skirts, carried designer bags and tried not to wince in stilettos. Why would I do this? It started when I moved to Mumbai, after a short stint trying to establish my art practice in Kolkata. It was the heydey of the art business in the global economy, and I’d landed a plum job at a corporate art gallery. There, the pressure to conform to feminine beauty standards was implicit and intense.

There was never any direct form of pressure. I was never harassed. No one ever told me to do anything. They didn’t have to. Like a parrot, I took my cues from the group and mimicked them. I conformed in order to make life easier for myself — and it worked like a charm. I did well at my job. My efforts were not in vain. In those days, I was often mistaken for Soha Ali Khan — a well-known Bollywood actress who shares half my ethnic gene pool. Even I couldn’t help being flattered by that!

Still, as much as I tried, I couldn’t shake off the uneasy feeling that I was donning a disguise in a masquerade ball. And while part of me was quite happy to play along, I didn’t realize how deeply these cosmetic changes would impact my more essential sense of self. I hit a wall. I knew I was falling into a trap. The light of my true self-was getting dimmer. I knew that extricating myself from a way of looking would entail a drastic change of living. It would mean going into hibernation.

“I didn’t realize how deeply these cosmetic changes would impact my more essential sense of self.”

Not surprisingly, then, it was during a period of growing creativity that it all started to change back. I left the corporate art world and started to paint again. I knew I had to restart the process of socialization, and I knew it should again start with my hair. Just as I had to grow it out to prove a point, I had to cut it off to prove another.

So off it came in stages, from long to medium to short. I started with an asymmetrical cut that was pretty hip, but still quite feminine. The decision was not without severe bouts of anxiety about how I would be perceived. In a country where the social collective defines one’s identity, asserting the right to define myself was probably the most radical thing I could have done. For a while, having short hair became a real liability, especially after I gave up all pretences of femininity. I could see the looks of alarm, then pity on people’s faces. I constantly had to explain myself to others. There were whispers, giggles and derogatory comments: “She’s gone butch.”

Once I was asked by someone I respected why I felt the need to wear my sexuality on my sleeve. I swallowed the question at first, then decided to respond as politely and academically as I could about my inner changes. I saw people’s reactions as evidence of the collective body malfunctioning — this army of faceless individuals was punishing the fact that I’d broken an unspoken law.

“This is what the fall from grace feels like,” I told myself. For a whole year, I crawled into a cave. I withdrew from the public life I had been leading, a life of constant dinner parties, endless small talk and meaningless relationships. I went through depression. I also stopped wearing makeup, cut my nails short and stopped coloring them, and gained more than 20 pounds. I felt awkward about my physical changes, much like a prepubescent boy on the verge of adolescence.

Painting became my only solace. I spent many hours alone, paint accumulating under my unevenly trimmed nails, flopping exhausted into bed every night because I’d given my all that day to the outpouring of my psyche into color and pigment. I focused wholly on caring for myself and to reconnecting with the smaller things I had overlooked in my temporary quest for sameness — music, poetry, books, even people.

In my cocoon, something truly remarkable happened. I started to be happy. Not just happy, but really, really happy. It started slowly, and like brilliant sunshine, it washed over my entire being and radiated outward, like rays of the sun pouring out from my being. I started to embrace myself, this new person I’d morphed into who was the real me. The more distance I placed between myself and other people’s idea of me, the bolder I became about my own choices.

“I started to embrace myself, this new person I’d morphed into who was the real me.”

More recently, my stylist gifted me a blond mohawk, which became my signature look. I wore it with pride, parading streets and parties alike with dignity and aplomb. The punk look earned me the moniker “Andy,” after a tongue-in-cheek Facebook post in which I’d compared myself to Andy Warhol went viral. I took it in stride, enjoying the attention with a sense of fun. I was still aware that the social body was reeling. The difference was that it was now applying humour and curiosity as a coping mechanism for my transgression. The most oft-asked question I still get—mainly from baffled women—is: “Why did you do it?” What they mean is: “Who gave you permission?” From Soha Ali Khan to Andy Warhol — in Indian society, that’s a long way for one woman’s identity to travel.

In my quest for selfhood, my hair experiences have unfolded, accidentally or otherwise, as the method of my resistance, a symbol of my own unwillingness to conform to gender expectations. I’m fully aware that my seemingly minor outward changes wouldn’t even extract a cursory glance in cities like New York, London, Paris or Berlin — but even in a relatively progressive Indian city like Mumbai, my hair has the power to incite a reaction, followed by attempts to push my transgression back behind the invisible barbed wire of propriety.

Perhaps change starts from within, and my boundary-pushing has been part social experiment, part artistic exchange — and even partly a quiet love-letter to India. I believe it’s only when we allow all individuals to express themselves in mind and body that we can start imagining a country that nourishes true equality. I want this for India. Each person has to choose their method of resistance, of course. And it’s important to wear our authentic selves with pride, whether it’s on our heads, our sleeves or anywhere else. My hair is only one aspect of my expression, but in a culture that radically rejects anything that doesn’t conform to binary gendering, it’s also come to symbolize personal and creative freedom.