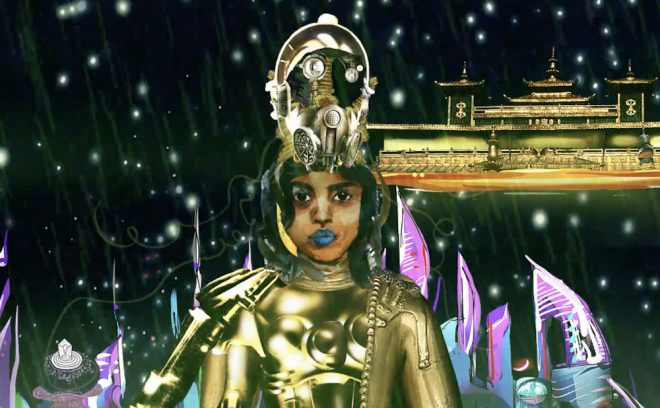 Chitra Ganesh’s appropriations of traditional Hindu and Buddhist artworks are part homage to the past, part alternate realities and part badass feminist interventions.

Chitra Ganesh, an art world fixture in New York for close to two decades, is a force to contend with. She emerged on New York’s art scene in the early noughts when cultural discourse on postcolonial subjectivity was reaching its boiling point in the academic and art worlds. The publication of “Can the Subaltern Speak?” (1988), a groundbreaking text by Gayatri Chakravorty Spivak, was seminal in the conversation for South Asians from the diaspora. It gave us license to see ourselves as primary subjects, as protagonists capable of creating alternate narratives within the mainstream art world — in which we had thus far been invisible.

Although the postcolonial debate has changed, Ganesh is among the few artists to retain its original strategies to embody brown, feminist politics and critique systems of power. Her earliest, and still one of her boldest, innovations was her appropriation of the immensely popular Indian comic book series Amar Chitra Katha (which literally translates to Immortal Picture Stories). Initiated in 1967 by Anant Pai, the series was intended as a pedagogical tool to educate children on their cultural heritage through the retelling of stories from Indian epics, mythology, history, folklore and fables.

Not surprisingly, the stories reflect the racial, religious, socio-economic and gender prejudices of India’s predominantly patriarchal and religious orthodoxy, which privileges fair-skinned, upper-caste Hindu males (caste is a toxic, hereditary class system particular to the Hindu religion). The comic books were visual and narrative minefields for Ganesh’s subjective interpretations.

The Rubin Museum of Art provides its own site-specific minefield for Ganesh’s gender- and stereotype-busting revisions. Tucked away on an unassuming corner in Chelsea, the Rubin’s intimate theater of Hindu and Buddhist history and mythology is represented by a fascinating assortment of objects, including scroll paintings (thangka), sculptures, and illuminated manuscripts. Five large-scale animations collaging past and future worlds interpret exquisite objects from the Himalayan region in The Scorpion Gesture, Ganesh’s immersive exhibition at the Rubin. Curated by Beth Citron, the museum’s Curator of Modern and Contemporary Art, the newly commissioned works are interspersed among the museum’s second- and third-floor pre-modern collections.

“So often the public views what they see and read in museums as recorded fact, when in truth, it’s one interpretation,” Citron stated by email. “Ganesh was a clear choice because of her brilliant skill of translating complex narratives into poetic, contemporary and visual stories. We wanted her to consider the collection through an entirely new lens.”

Ganesh draws on the iconography of nearby artworks relating to Padmasabhava and Maitreya (known to Tibetans as the Second and Future Buddha, respectively), juxtaposing the traditional works with alternative realities drawn from her personal cache of images to invent faux-histories in her animations. Her appropriations are part homage to the past, part alternate realities and part badass feminist interventions.

Museum-goers may have seen Ganesh’s impressive mural, Eyes of Time(2014), which served as the centerpiece of her first solo museum exhibition in New York, at The Brooklyn Museum. Composed of hybrid elements, the mural is a daring representation of the Goddess Kali as a three-breasted warrior who controls the cycles of time.

Kali figures prominently in both Hindu and Buddhist iconography, and is still widely worshipped in the Hindu religion — so much so that questions of her representation can incite fervent debate, controversy and even communal violence in India. A dark-skinned, full-bodied, sexually voracious femme fatale with an insatiable appetite for violence and destruction, Kali is a ripe symbol of female empowerment, and feminist rage at social injustice.

With The Scorpion Gesture, Ganesh revisits many themes commonly associated with Kali (in particular, the cycles of time, birth and death; injustice; and the end of the world), while weaving in her own apocalyptic visions of the future. We are confronted with amplified doomsday scenarios in which only cyborgs and mutant females are left to rule the earth — or what remains of it.

The scorpion gesture, I learned from the museum’s website, is a symbolic hand gesture (mudra) said to have “unlimited power and potential for transformation.” I’m reminded of the transformative power of stories. Entering a story’s dreamworld requires ones surrender to the storyteller — which is essentially what Ganesh is. I encountered in the exhibition subverted traditions within richly layered visual worlds. Nonlinear narratives, peopled with an exotic array of characters and situations culled from myriad sources (including Ganesh’s own illustrations, watercolors and drawings) somersault seamlessly in a dazzling display of gender politics, with a sprinkling of feminist rage.

From the first animation, Messenger (2018), to the last (and most ambitious), Metropolis (2018), the artist takes us on a joyride through imaginary worlds that re-imagine the past while positing new, female-centric narratives for the future. The protagonist in Rainbow Body(2018) is Mandarva, a female spirit (dakini) and princess in Tantric Buddhism. Mandarva  is said to have entered into a sexual union with Padmasabhava, which led to mutual enlightenment and consciousness transformation. The animation opens with Mandarva as she awakens in her bedroom, then follows her journey through the bardo — the liminal space in which the soul travels between death and rebirth. The bardo is reimagined by Ganesh as a deep, cavernous space littered with wrathful deities that take monstrous forms, with a psychosexual charge.

Silhouette in the Graveyard (2018), the first of three animations on the third floor, is an unusual, and successful, juxtaposition of the past and present. Projected directly behind a stunning gilt copper sculpture of Maitreya from the late 18th or early 19th century, the animation serves as a backdrop, which, in turn, animates the standing protagonist, emanating from it like an auratic field. A macabre scene of cosmic and hallucinatory imagery begins with dancing skeletons and a carnage-strewn river of blood, before the familiar silhouette of the three-breasted woman enters the frame. (Is she, like Kali, a savior?)

The macabre imagery shifts to reveal another space in which the female silhouette is collaged with video and photographic images of global protests, including Black Lives Matter, which is further collaged against found footage of ecological devastation and climate change. Here, the mask falls away to reveal Ganesh, the activist, unleashing a visual tirade about political and environmental collapse. Ice caps melt, floods claim low-lying regions of our planet, and human rights abuses run rampant. All the while, the omniscient Maitreya bears witness, smiling beatifically through the spectacle of human misery. The irony that religious faiths have played a key part in shaping our damaged, sectarian world is probably not lost on him, either.

The visual onslaught of everyday violence arrives like a jolt, a wake-up call to the present from the reverie of the animation’s dreamworlds. In her written statement on this work, Ganesh writes, “Maitreya is the Future Buddha whose prophetic arrival is said to usher in a new age at a time when the terrestrial world has lost its way. The endless stream of images of political, social, and ecological upheaval that we are bombarded with daily seemed in uncanny alignment with the apocalyptic moment associated with Maitreya.” Is our present any more of a reality than those represented in the animations, or by the historical objects that surround me, I ask myself? According to the Hindu and Buddhist concept of maya, all are illusions of a kind; consciousness, is but a mirror.

Metropolis (2018), the last work, takes its name from Fritz Lang’s classic 1927 sci-fi film. The work is a response to a richly detailed Tibetan painting across from it, Life Scenes of Master Shantarakshita from the 19th century; in it, Ganesh compares her role as an artist-interpreter with the painting’s subject, a scholar who purportedly played a critical role in translating scriptures. It is said that he was instructed to oversee the construction of Samye, the first Tibetan monastery. This detail becomes Ganesh’s narrative point of departure to comment on civilizational hubris. Metropolis re-envisions a dystopic future with Maitreya as one of the artist’s hybrid femmes, a multi-limbed cyborg evoking the iconic sci-fi character Aelitas, Queen of Mars, among other characters.

Over the years, Ganesh has diversified her drawing-based practice, incorporating new media and strategies, including grassroots activism. In her first fully realized body of animations, the complex, expansive worlds she generates through wall drawings, collages, computer-generated imagery, watercolors, photography, filmmaking, and activism merge into a total form of mythmaking.

Three of the animations are motion-generated and are intended to “appear as if by magic when you walk by select artworks,” according to the museum’s website. If you’re not specifically looking for them, they’re easy to bypass, which would be a loss. By opening up the narrative field of possibilities, Ganesh’s animations provide radical alternatives to viewing cultural history as a series of recorded facts, exposing them instead as a set of social constructs. The projected images, interacting with emblems of the past, convey the sense of a choreographed dance, one in which both partners are in step.