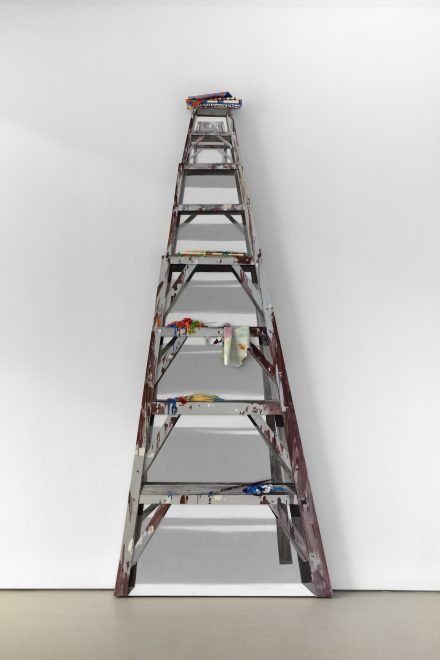 Navigating the Slippage Between Reality and Illusion

The architectonics of Leslie Wayne’s structures exude impermanence and a poetic expression of loss.

For a knowledge of intimacy, localization in the spaces of our intimacy is more urgent than determination of dates.

― Gaston Bachelard, The Poetics of Space

The titles of Leslie Wayne’s paintings — “Planetary” (2019), “Heirloom” (2017), “Burning Down the House” (2018) — impart some clues as to what’s been inside the artist’s mind since her last solo exhibition, Free Experience, at Jack Shainman in 2017. Less than two years later, there appears to be an inversion. The joy and freedom of experimentation evident in those smaller-scale abstract paintings have yielded territory to sobriety and introspection. In the new show, Wayne takes a bold leap into representation. Intimate objects from the artist’s private and inner world, primarily from her studio and home, are carefully reconstructed with wood, canvas and paint, using a technique that is equal parts painting and sculpture. The result is 14 new sculpturally-minded paintings that use illusion to play with our perceptions of reality.

“Planetary,” the first work encountered in the show, is an eight-foot tall wooden panel shaped as the kind of ubiquitous metal ladder found in artist’s studios. Wayne’s ladder has a gorgeous rust red that’s been spilled all over it. A runny mixture of pigment and solvent, it streaks and stains to create rivulets that evoke, for me, warm bodily fluids. The cool, metallic silvery shade of the ladder creates an optical contrast with the streaming pigment across its surface; its solidity and implied weight seem to imply the body itself.

We approach “Planetary” at an oblique angle, imagining it to be just another scrappy ladder resting on the floor, albeit, possessing a rather aesthetic scrappiness. So convincing is Wayne’s fabrication of reality, that only on closer inspection do the surface anomalies and spatial incongruities begin to reveal the fiction of the object. She is a master of the details that suspend the viewers’ disbelief just long enough to hold them in an intimate encounter: tromp-l’oeil shadows that cast on the “wall” behind the ladder, and the loose screws that hold it together; a folded white cloth with flecks of brown paint and colorful bundles of mushed-up paint rags on its steps; a tidy pile of striped and plaid cloths ornamenting the ladder’s zenith (whose perspective is exaggerated to heighten its monumentality). The evident playfulness and humor of these illusions belie their meticulous construction, culled from a compelling toolbox of painterly tricks developed by the artist over three decades.

Windows and wardrobes are other sources of fascination for the artist. In Free Experience, Wayne introduced the window idiom with broken and partially boarded up panes. In this exhibition, she goes straight through them to explore what’s on the other side. The most enigmatic of the window series is “Unforgotten” (2018), an oil on canvas work mounted on wood. It’s the subtlest of the broken windows, with minimal traces of the artist’s illusory devices, but all the more powerful for its simple evocations of metaphor and possibility.

The horizontal painting depicts a forlorn window with a ivory-colored wooden grille that has seen better days. The six-by-three grid that forms the rickety grille is lined with just a few remaining, if determined, glass shards. Behind the glass — or is it in front? — layers of white curtains appear to be captured in motion, in a gentle sway. Blue and indigo shadows dance upon their surface, forming wave patterns and oblique angles that intersect and overlap symphonically. The deep blacks, purple shadows, and warm and cool whites of the painting’s interior are offset by the warm brick that simultaneously delineates the sides of the window frame and forms the edges of the painting. Art history is embedded in Wayne’s work, and so it’s not any more peculiar to chance upon a deliberate overture to the Modernist grid or Barnett Newman’s “zip” than it is to notice a casual reference to Hokusai (“Heirloom”). Art history aside, “Unforgotten” pulls together all the marvelous ambiguities that underscore this exhibition’s theme, and that it does so with an economy of means is all the more beguiling.

But I’ll come back to this later.

In Poetics of Space, Gaston Bachelard’s seminal book on the resonances of a home, he writes:

We comfort ourselves by reliving memories of protection. Something closed must retain our memories, while leaving them their original value as images. Memories of the outside world will never have the same tonality as those of home and, by recalling these memories, we add to our store of dreams; we are never real historians, but always near poets, and our emotion is perhaps nothing but an expression of a poetry that was lost.

The architectonics of Wayne’s structures mediate the in-between space of impermanence and maybe even point to a poetic expression of loss. Duality reveals itself in the slippages between numerous dialectical manifestations: open/closed, illusion/reality, absence/presence, painting/sculpture, abstraction/figuration, among many others. Wardrobes, chests, and doors are all slightly ajar, revealing both literal and metaphorical situations. The most fictional of these, “Burning Down the House,” depicts a powdery-blue door complete with a doorknob, which partially opens to reveal a closet. Stacked at the bottom of the closet are paint tube boxes, and atop of them are what appear to be crumpled-up cotton paint rags rendered in masses of impasto paint. The rags are engulfed in flames, which leap upward in an angry stream of fluorescent hues, until they’re licking the neatly folded rags on an upper shelf. It’s impossible not to feel an undercurrent of political anxiety, born of American hubris under Trump, and the subsequent crisis of art. These themes foster a palpable strain in this work and throughout the entire show.

Wayne was born in postwar Germany in 1953, where her family lived for a few years before moving back to California. She was, by her own account, raised in a secular upper-middle-class Jewish-American household. On my first visit to her studio, which occurred after Free Experience, my eye fell upon an exquisitely painted postcard-size copy of Gerhard Richter’s masterpiece, “Betty” (1991) a photo-realist portrait based on a snapshot Richter took of his young daughter, Betty, in 1978. The painting, which blurs the lines between photography and painting, flattens perspective while simultaneously achieving a sense of deep space: Betty is turned away from the camera, and her act of looking into an indescribable distance produces the illusion of perspectival depth, mediating an imaginary threshold between the past and the present. The painting has largely been read as a critique of Germany’s obsession with its past, and in turn, its denial of the future.

The arresting temporal and spatial threshold of “Betty” is activated by the young girl’s spontaneous turn as she looks away; similarly, the provisional frames of reference alluded to in What’s Inside — movement, spillage, disorganization and disarray — indicate a threshold, passage, or becoming. It’s telling that the artist painted her miniature copy in 2001 after 9/11 had devastated New York City and altered the American psyche forever. The additional shock of losing her father around the same time sent Wayne on a voluntary personal sabbatical. While the artist experimented with figuration before and during her student years at Parsons School of Design in the 1980s, her rendering of this figurative painting during a particularly fraught personal and political moment potentially planted the seed for Wayne’s return to representation. It also signals her preoccupation with thresholds that interface both lived and historical realities in the age of Trump. She nuances questions of who we are and where we stand: are we inside looking out, or outside looking in?

Wayne can, just as easily as Richter, perform slippages between categories and glide elusively across terrains of meaning; but, unlike Richter, Wayne doesn’t shy away from sentimentality, with a sprinkling of joy and humor. In the press release for this show, she states, “Though these paintings represent my political anxiety, I am also not a bleak person by nature. So for me, the idea of a broken window is also an invitation for some sort of renewal. A window can be fixed, new histories can be made.”

The insistence on hope, renewal, and the future is what elevates these safeguarded intimacies, revealed by Wayne for the first time through acts of representation, above the kind of heavy-handed rhetoric that the current political climate can justifiably invoke. For all the technical wizardry up her sleeve, these elaborate constructions exhibit, above all else, Wayne’s attachment to those things in her universe that enable her to do the thing she loves most — painting.

Go to the original on Hyperallergic.com here.