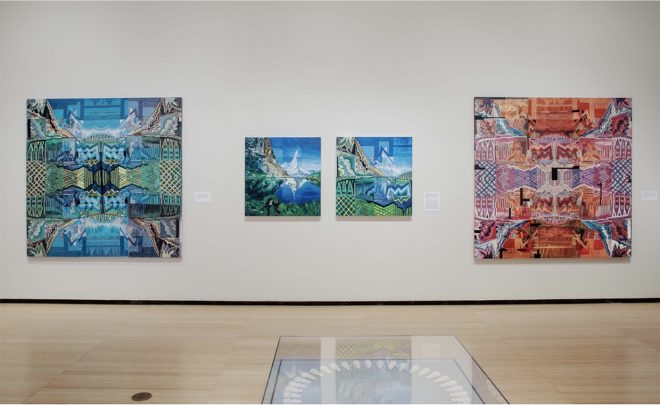 Raja, who was 49 when he passed away on July 20, charted a singular artistic and personal trajectory between America and India.

Tucked away near the BQE in Gowanus, Brooklyn, is Kanishka Raja’s studio. Two spacious rooms on the first floor are filled with stretched canvases, old and new paint tubes, and brushes and shelves laden with books. Photographs and clippings are neatly filed away. A table in the center of the first room is covered with odds and ends, drawings, a few photographs and more folders. There are finished and unfinished paintings on the wall. Sketches for new ideas. Everything seems to have its place. It is, in many ways, a classic painter’s studio.

On a far wall hang hundreds of photographs Raja had taken of structures made for Durga Puja in Kolkata during one particularly long visit to the city in 2016. Durga Puja is a sacred festival that takes place once a year, when it is said that the supreme Mother Goddess from Hindu scriptures descends on an earthly mission for ten days to vanquish evil. The city bustles with activity, hundreds if not thousands of shrines, from the makeshift to the baroque, transform Kolkata into a carnival of lights, music, and endless celebrations.

Raja’s Kolkata photographs are not sentimental overtures or religious genuflection, but instead, rigorous documentation of the incredible diversity of structures, textures, patterns, materials, craft, and innovations of the city’s brilliantly skilled artisans, which served as the source material for his most recent work.

Raja, who was 49 when he passed away on July 20 after a year-long battle with cancer, charted a singular artistic and personal trajectory between two worlds: America and India. He created paintings, drawings, murals, sculptures, installations, and public art that straddled representation and abstraction, architecture and ornament, formalist strategies and pictorial narrative, and churned styles, iconographies, and histories into an indelible web of postmodern critique.

The son of influential textile designers in Kolkata, Raja moved to the United States 30 years ago to pursue his studies, living in Massachusetts and Texas before settling in New York with his wife and partner, Juli Raja. He never lost the thread of his engagement with his native city and the traditions he grew up around, chiefly textiles, patterns, weaving, woodblocks, color.

Denzil Hurley first met and worked with him at Hampshire College, where Raja was a student, new to this country, and ready to immerse himself in everything. Denzil writes to us, remembering our mutual friend and colleague:

Kanishka showed himself to be an open and direct individual who engaged everyone while being totally committed to his own work and its development. He seemed to have an intuitive, and clear sense of what he wanted to find out, process, and express. His penchant for ideas, his knowledge and experience of the history and culture of his birth, and the artistic traditions therein seem to inform his developing practice. Kanishka’s knowledge of colonial political structures, their influences and impacts showed him to be an astute observer who was willing to confront his own perceptions with commentary and critique in his studio practice.

Raja viewed his labor as akin to the craftsmen who work with their hands every day, oftentimes within severe economic constraints that force invention and material resourcefulness. He considered the emblems, signs, and motifs of his cultural heritage as the stuff of experiential DNA, things to be molded into the rubric of his art.

Even so, he understood the implicit aversion to ornament and color that resides in Western aesthetics, as well as the dangers of being culturally stereotyped in the art world. He envisioned a more equitable position for himself and his art, proposing a more symmetrical power binary between Western art history and non-Western cultures within the parameters of contemporary American painting.

Raja studied at the Skowhegan School of Painting and Sculpture during the summer of 2000. Amy Sillman was part of the school’s admissions process when she first encountered his work, along with Fred Tomaselli who was also a judge that year. “We met him on the first day of Skowhegan, this utterly dashing, charming, witty man,” she writes in an email. “He was working on a really high level there, a serious and already accomplished fellow. I think we all just felt lucky to get to meet this guy on his journey, a really good artist already, not a student; he did not need our input, but was curious and gracious and very interested in discussion anyway.”

Between 2000 and 2010, Raja’s paintings and installations included mash-ups of architectural spaces, cultural signifiers and art historical antecedents, transitory and proxy places, and wildly ambiguous landscapes that produced a frisson of optically explosive dioramas, with electrical undercurrents of political and social anxiety. “He was an amazing draughtsman with a deep understanding and love for color,” writes Denzil. “This was all part of his recent intentions and work involving complexity of visual and historical traditions. He felt and showed the necessity to imbue his painting with modern and contemporary critique involving corollaries that befits serious and open engagement with processes and materials while examining the world, and contributing a different proposition and realization to it. I saw directions in his recent work that were loaded with impact and importance to painting, cross-cultural critique, and his individual stance in the field.”

Raja continued his studio practice and kept up his professional commitments until his condition made it impossible. He was furiously at work on his PostWest series, in which he combined painting and weaving as symmetrical forms of labor, some of which were featured in the group show Lucid Dreams and Distant Visions last summer at Asia Society New York and, later that year, in a solo exhibition titled PostWest, v.2a: Ornament and Translation at Sarah Lawrence College.

These paintings, part landscape, part dizzying kaleidoscope of pattern-making juxtaposed with their translations into woven textiles, are like fizzed-up Rorschach tests, their visual excitement belying their meticulousness and method. Amy Sillman offers, “It seemed like his true joy was in inventing pre-digital forms of compression: pre-screenal spaces where words, lands, rooms, swirls, meshes, screens, patterns, are all compressed together into wildly extruded perspective systems, spaces with a kind of jacked-up opticality that won’t let the viewer off the hook, keeps them somewhere both utopic and impossible.”

In a daring work, “I and I (Missed Twice)” (2014), Raja stacked a landscape painting of the Swiss Alps against a painting of the same size, with exactly the same image rendered as an intuitive pattern, and shot two bullets from a Magnum .44 through them — evidence that, as much as external forces attempt to puncture the duality and shared DNA of these paintings, they remain symbiotic, fraternal twins if you will, eternally conjoined and indestructible.

If a Rorschach test reveals the underlying cognitive patterns that provide knowledge about personality, then Raja’s experiments with visual data, translation, collaboration, ornament, representation, duality, and symmetry point to the forms of labor and value that underscore codified systems of power (between East and West, art and craft, modernity and tradition, artist and laborer). Both draw upon quasi-scientific or technological methods, but they also intuit patterns as expressions of the individual and society. A representation, perhaps, of the imperfect symmetries and correlations between dualistic systems of thought and power.

María Magdalena Campos-Pons, who met Raja while he was establishing Green Street Gallery with curator James Hull in the late ‘90s, a bold initiative to create a venue for contemporary art in a subway station in the edgy neighborhood of Jamaica Plain in Boston, remembers the artist as an incisive observer and commentator. “Kanishka’s oeuvre is a testament to his fine intellect,” she writes in an email. “An epitome of cosmopolitan hybridity, a visionary painter. He captured the rapture and angst of the times, and rendered dislocation and exodus in extraordinary ways.”

During a roundtable discussion at Alwan for the Arts in New York a few months shy of his untimely death, Raja spoke fervently about contemporary art, aesthetics, and the critical role of artists in a market-driven society. Although his health had deteriorated considerably by this time, there remained about him a studied intensity and critical authority.

He also loved sports, and had a wry sense of humor. Towards the end, he joked about how his condition enabled him to watch every match of the World Cup without guilt. Sports fields, like airports and the crispy altitudes of Switzerland, were another of his chosen proxy places. In a studio visit posted online, he talked about the lines of sports fields as limits you cannot cross. In his art though, he tested all the limits he could find. He was a rebel, intellect, and idealist.