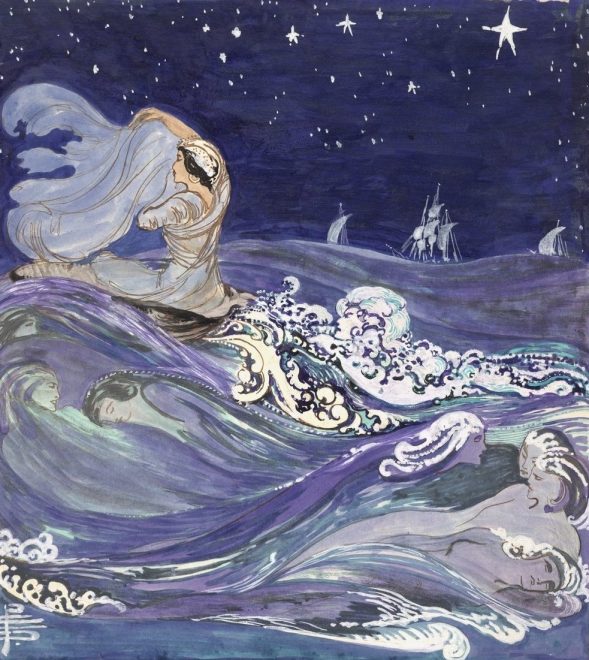 Reviving a Forgotten Artist of the Occult

Today, more than 100 million copies of Pamela Colman Smith’s Tarot card designs, the Rider-Waite-Smith Deck, are in circulation in over 20 countries, making it the most popular set ever made.

A portrait taken of Pamela Colman Smith (1878-1951) just after she had turned 33 depicts a gamine woman, with fiercely intelligent dark eyes that twinkle with intensity, her face bristling with impish charm.

The black-and-white photograph (taken by an unknown photographer), first published in the October 1912 issue of The Craftsman in an article by M. Irwin Macdonald entitled “The Fairy Faith and Pictured Music of Pamela Colman Smith,” conveys some of the aura and mystery that have so far shrouded this notable illustrator and artist.

Pamela Colman Smith: Life and Work, a small but sensitively curated exhibition at Pratt Institute Libraries in Brooklyn, organized by Colleen Lynch and Melissa Staiger (both alumni of Pratt Institute), constructs a portrait of an artist who demands much more consideration.

Installed across the library’s foyers on three floors, the exhibition presents reproductions of Smith’s art works and magazine illustrations alongside her writings, letters, and documents. These records conjure a constellation of famous friends and patrons, which included figures as diverse as Alfred Stieglitz and Bram Stoker. Smith’s magnum opus is the Rider-Waite-Smith Deck, a set of 78 Tarot cards filled with vivid oracular illustrations.

Smith was born in London, England, to wealthy American parents who enjoyed a large circle of influential friends. She lived for a time in New York and Jamaica before moving back to America in 1893 to enroll at Pratt Institute, a few years after the founding of the college. There, she studied under the Institute’s chairman, Arthur Wesley Dow. A painter, printmaker, photographer, and influential arts educator, Dow introduced Smith to the significant styles and ideas of the day, including Art Nouveau and Symbolism, which she boldly asserted in her mature work, with sparkling originality.

In Composition, Dow’s groundbreaking illustrated pedagogical treatise from 1899, he establishes an American approach to Japanese composition. In Dow’s view, three elements are needed to produce a well-crafted and beautiful object: simplicity of line; a balance of light and dark, or “notan”; and symmetry of color.

Smith was deeply influenced by these ideas. In the essay, “Should the Art Student Think?,” which originally appeared in The Craftsman in July 1908 (and is reprinted in a takeaway pamphlet accompanying the show), she writes:

I do not want to see riotous, clumsy ugliness suddenly spring up, but a fine noble power shining through your work. The illustrations that I see in the magazines by the younger people are all dignified and well, carefully and conscientiously drawn, but their appalling clumsiness is quite beyond me—their lack of charm and grace.

I do not mean by charm, prettiness, but an appreciation of beauty. Ugliness is beauty, but with a difference, a nobleness that speaks through all the hard crust of convention.

Smith left Pratt in 1897 without a degree. Her mother had died the previous year, and Smith suffered a spate of illnesses. She soon moved back to London with her father and took up commercial work as an illustrator.

In London, she was taken under the wing of the Lyceum Theater group led by Ellen Terry (who affectionately called her ‘Pixie’), Henry Irving, and Bram Stoker. She traveled around the country with them, working on costumes and stage design. Tragedy struck again when her father died. She was 21 at the time.

Despite her personal losses, Smith was able to find early commercial success and a healthy dose of notoriety in England. In 1901, she established a studio in London and held weekly salons for artists, authors, and actors. In his 1907 Bohemia in London, the English writer Arthur Ransome describes one of these evenings and the artistic circle surrounding Smith, who went by the nickname “Gypsy,” wore orange robes and regaled her guests with folk tales and performances. All the while, she produced paintings, illustrations, calendars, and posters, and even branched out into miniature theater.

Some of her first projects included The Illustrated Verses of William Butler Yeats (1898), and her own writings, including Annancy Stories and Widdicombe Fair (both 1899). For a while, she contributed regularly to The Broad Sheet, a literary monthly co-edited by Jack Yeats, before starting a paper of her own, The Green Sheaf, which she edited and contributed poems and illustrations in color.

It’s believed that many of the mercurial characters embellishing the Rider-Waite-Smith Deck were based on her social set; the most distinguished among them, perhaps, is Henry Irving, the celebrated Victorian-era actor-manager who was later knighted (purportedly Irving was also one of the inspirations for Stoker’s Count Dracula).

The cloaked and cultish figures in the Rider-Waite-Smith Deck make their appearance as early as 1904 in Smith’s illustrations, as seen in the reproduction of “Sir Henry Irving as Cardinal Wolsey” in William Shakespeare’s Henry VIII, a pen-and-ink work which was part of a number of postcards and posters Smith made of Irving to promote the Lyceum’s plays. An economy of richly drawn, calligraphic lines describe the drapery and the cassock, while a thick shadow cast on the wall imparts a distinct sense of menace. The illustration underscores the key elements of her signature iconography: a lone, central figure, draped in medieval garbs and veiled in mystery.

Smith had a neurological condition called synesthesia, which is an automatic visual experience, in this instance, activated by sound. In a handwritten draft for the essay “Pictures in Music,” published in the June 1908 issue of The Strand Magazine, she reveals an informed understanding of synesthesia, a concept Dow had introduced to her: “What I wish to make plain is that these are not pictures of the music theme […] but just what I see when I hear music. Thoughts loosened and set free by the spell of sound […] Subconscious energy lives in them all.”

Smith’s solo exhibition at Alfred Stieglitz’s 291 Gallery in Midtown Manhattan was the first non-photography exhibition to be held there. In a letter to the famous photographer and gallerist in advance of her show, she sent the titles of the works as if they were a concert program of Western Classical music, with overtures, sonatas and concertos. The exhibition featured 72 watercolors and was a rapid commercial success. She was to have two exhibitions at the gallery.

Her color schemes, inspired by listening to music, are strikingly intuitive and experimental, yet subsumed in a spectral light of intrigue and magic. I am left to imagine the effect of the actual watercolors, which must have been wondrous. As Smith wrote in “Pictures in Music”: “When I take a brush in hand and the music begins it is like unlocking the door to a beautiful country […] with plains, mountains and the billowing sea.”

Smith’s participation in the occult is documented through her membership at the Isis-Urania Temple of the Hermetic Order of the Golden Dawn starting in 1901, which studied the occult, metaphysics and the paranormal. Introduced to the Order by W.B. Yeats, she came to the attention of the scholarly mystic and poet, A. E. Waite, who eventually commissioned her to do the Deck in 1909.

The 78 jewel-like illustrations of the Deck represent archetypal subjects that each become a portal to an invisible realm of signs and symbols, believed to be channeled through processes of divination. Queens, Knights, Fools, Priestesses, Magicians, and a whole host of arcane paraphernalia populate these worlds.

The originality of the cards’ stylization, draftsmanship, and composition make for a magnificent aesthetic achievement while displaying Smith’s jaw-dropping imagination for fantasy, folly, ecstasy, death, and the macabre. Two years later, she composed illustrations for Bram Stoker’s last book, Lair of the White Worm (published in 1911, a year after the author’s death) and converted to Catholicism.

Despite her early fame and determination, Smith slipped onto obscurity. She never achieved the financial security she desired, nor the recognition she deserved. The exhibition notes the artist’s feminist bent in her work and life, and includes important documents from her involvement with the Suffrage movement. A sepia-toned reproduction of a photograph titled “Ellen Terry at Ann Hathaway’s Cottage” (1902), taken by Smith’s friend and fellow suffragette, Edith Craig, captures Smith with a circle of influential women and activists, including the suffragist playwright and author Christabel Marshall. It also provides a wonderful portrait of female friendship.

Smith was experimental, interdisciplinary, and collaborative long before any of them were fashionable — an intelligent, worldly, and independent thinker with prodigious talent. Still, she died penniless and uncelebrated at the age of 73 in Bude, England. Had it not been for her iconic signature, which she designed while still a student, her name might have been lost forever.

When she was studying with Dow, the champion of Japanese design, he had his students make a monogram from their own initials using the traditional woodblock method. Smith’s monogram, PCS, a serpentine cipher on every Tarot card is a critical claim on their maker’s intellectual property (there was of course no question of a woman possessing intellectual property at that time).

Today, more than 100 million copies of the Rider-Waite-Smith Deck are in circulation in over 20 countries, making it the most popular Tarot deck ever made. As we set forth to recover lost histories and systematic erasures of women’s intellect and labor, this exhibition provides an essential piece of the puzzle.