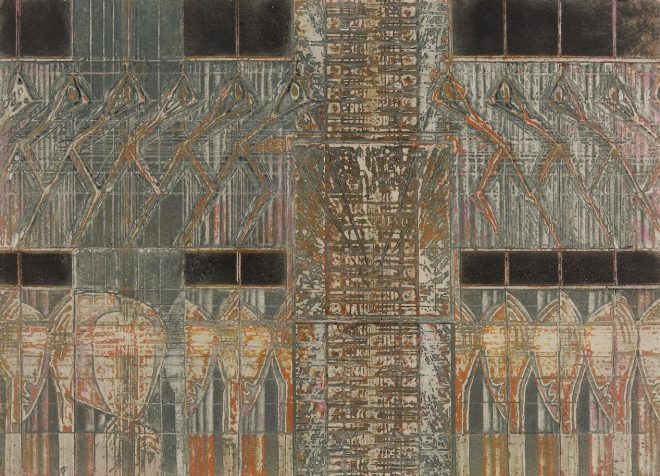 KOLKATA, India — Printmaking, for which the Indian artist Krishna Reddy (1925–2018) was richly regarded, is at the center of To A New Form, a posthumous solo exhibition at Experimenter in Kolkata, India.

The late master’s second solo exhibition at the gallery (he passed away in August 2018 in New York at the age of 93) is a display of prints on paper alongside selections of figurative and preparatory drawings from different suites, original zinc and copper plates, and a Cubist-inspired bronze sculpture.

Seen together, these elements frame Reddy’s singular approach to form-making through a fluid exchange between printmaking, drawing and sculpture. With walls painted in shades of cobalt blue and mustard yellow, the exhibition cleverly uses the gallery’s L-shaped footprint to create spatial separations between distinct bodies of work. The selection is eclectic, but it works.

The visual and conceptual anchor is a selection of four prints made between 1980 and 1981 from The Great Clown series (1975–1982), which use the intaglio method combined with Reddy’s signature invention of multicolor viscosity printing.

Intaglio is the incision of an image onto a metal plate, which is traditionally covered with a single-color ink and pressed onto paper. A more complex image would require multiple pressings with differently colored inks.

While at Atelier 17 in Paris, a studio founded by the pioneering British printmaker Stanley William Hayter, Reddy refined a technique that allows variously colored inks to be printed at the same time by controlling the viscosities of the inks.

This was postwar Paris, and Atelier 17 was a hub for experimental practices that pushed the creative possibilities of printmaking, becoming a stomping ground for influential American and European artists, including Max Ernst, Joan Miró, Louise Bourgeois and Jackson Pollock, who all worked there. It formed a kind of accidental thoroughfare for the Surrealist movement in Paris and gestural abstraction in America – both stylistic and idiomatic expressions evident in Reddy’s work.

In 1965, he became the director of the famous studio and published his findings and technique in the instructional book “Intaglio Simultaneous Color Printmaking: Significance of Materials and Processes” in 1988.

In To a New Form, the large prints from The Great Clown series manifest a multi-hued palette to a single image, demonstrating the technique’s examination of form through the emotive and performative possibilities of color. The semi-abstract image is composed of ferociously drawn lines linking spherical balls of energy that resemble blast waves radiating from an underwater explosion. Yet the image could just as easily describe the intricate beauty of a butterfly’s wing.

The movement and speed generated by the lines and cellular forms recall the Futurist aesthetic of “universal dynamism,” although ideologically, Reddy couldn’t be more different from those Fascist-friendly ideologues, given his activity in leftist politics in India and Europe. He painted hundreds of graphic posters for the Quit India movement against British rule in allegiance with Mahatma Gandhi in 1942; later, during the worker and student uprisings in Paris in 1968, he made a series of prints and bronzes called Demonstrators.

The title of the series The Great Clown suggests a Dadaist critique of warmongering narcissists, with clear allegorical undertones: a nation in the clutches of a great clown is, indeed, doomed. (No doubt, the 2016 US elections neatly underscore this interpretation).

The last variation of the print is the most successful in balancing form, color, and meaning. It’s also the most pictorial. An angry “explosion,” rendered in hot siennas, oranges, and reds, pushes into the foreground against a veil of watery blues that hold between them a matrix of deep blues and indigos — an interweaving dance of hieroglyphic forms. This particular rendering, while it can be read as an abstraction, implies a kind of arena, a central narrator speaking to a remote audience.

Although the other prints from The Great Clown are striking in their examination of color interaction, the last version reveals the multiple trajectories of Reddy’s object-oriented approach to the image, which is borne out of a keen observation of the natural world.

Reddy was born in Chittoor in the southeastern state of Andhra Pradesh, India, in 1925, the son of a farm worker who painted temple murals in his spare time. He studied under Jiddu Krishnamurthi at the Rishi Valley School nearby, a philosopher and spiritual teacher who advocated for ego-reducing principles and community service. He then went on to study botany and biology at Visva Bharati University in the township of Santiniketan in West Bengal, which was established by the poet, artist, and humanist Rabindranath Tagore. The university’s pedagogy encouraged outdoor learning and experimentation, positioning itself as a desirable alternative to the colonial educational system that preferred rote learning and excessive discipline.

At Visva Bharati, Reddy was exposed to a humanist education that balanced art and science, nature and philosophy, and painting and sculpture. He found tutelage under Nandalal Bose and Ramkinker Baij, who are critical figures in Bengal’s rich history of Modernism. He also discovered his love for sculpture, which, combined with his studies in the organic sciences and spiritualism, explains the persistence of primordial forms, observational analysis of the human body, and themes of birth and mortality throughout his work. The six metal plates in the exhibition evoke bas-reliefs, revealing pits, valleys, and textures, combining images of organic phenomena with a Symbolist-inspired penchant for dreams and the supernatural; they are displayed opposite the corresponding prints.

The most enigmatic of these prints is Violence and Sorrow (date unknown, possibly 1995), a combination of hieroglyphic figures, ciphers, and profiles organized on vertical and horizontal planes and colored in earth tones. The figurative and chromatic elements invite comparisons to various religious, folk, and tribal traditions in India, revealing the artist’s lifelong preoccupation with fusing Indian art with European Modernism.

Reddy left India in 1949 to attend the Slade School of Art in London, where he studied with Henry Moore and Lucien Freud. The lone sculpture in the exhibition, the eponymous “To A New Form” (1968/2017), which is installed in a sunken section of the gallery floor was first cast in plaster in Paris in 1968, and later in bronze, in New York in 2017.

Its distillation of anatomical details into spare, bulbous forms displays Moore’s lineage, as well as the imbibed planar fragmentations of Cubism and the pinched surfaces of Alberto Giacometti (with whom Reddy was acquainted during his Paris years), but it also bears an uncanny resemblance to the style of his mentor, Ramkinker Baij, especially to Baij’s iconic work “Santhal Family” (1938).

In 1976, Reddy moved to New York where he was steeped in pedagogy and teaching, mostly at New York University, until 2002. He formed a close circuit of students and artists, which included Zarina Hashmi, whom he met in Delhi and mentored at Atelier 17.

Many of the drawings in the exhibition, which Reddy continuously sketched alongside printmaking, are organized into suites. While some are preparatory sketches for plates, most are figure drawings that feel like a quest for scientific truth, but with an air of expressive authority. This is especially so in the two sheets paired under the single name, “Untitled (Drawing 222)” (date unknown), composed of action drawings of a full-figured woman in motion. The bold, gestural lines and partial helixes delineating the figure reappear in The Great Clown and elsewhere, and recall the Surrealist process of automatic writing.

The stylistic differences highlighted in the exhibition reveal a proclivity for direct experience, experimentation, and curiosity over the stringencies of formal purity. In a notebook from the 1950s published on the Metropolitan Museum’s website, Reddy wrote, “The same way as the sound transforms into light waves through a medium, the visual form if expressed spontaneously in any medium like in words, music, colour, stone, metal, etc., a completely new form results. For the working process of nature cannot be initiated by our expressing the same experience through plastic mediums.”

Though rare, there have been exhibitions in New York and India over the last 40 years that have offered a critical lens through which to appraise Reddy’s influence and legacy, including a solo retrospective at the Bronx Museum of Art in 1981 that traveled to museums in Mumbai, Bhopal, and Kolkata. Three exhibitions at the Rubin Museum in New York in 2011 showcasing Modernist art from India included Reddy’s figurative drawings of Buddhist sculptures at the Ajanta Caves (1940), revealing the Indian sources of his art. And in 2016, the Metropolitan Museum of Art mounted the exhibition Workshop and Legacy: Stanley William Hayter, Krishna Reddy, Zarina Hashmi.

Still, a lot remains to be done. Reddy was reclusive until the end, studiously shunning the spotlight. To A New Form dignifies this Modernist master’s work by delving right into it.

Go to original at Hyperallergic here.