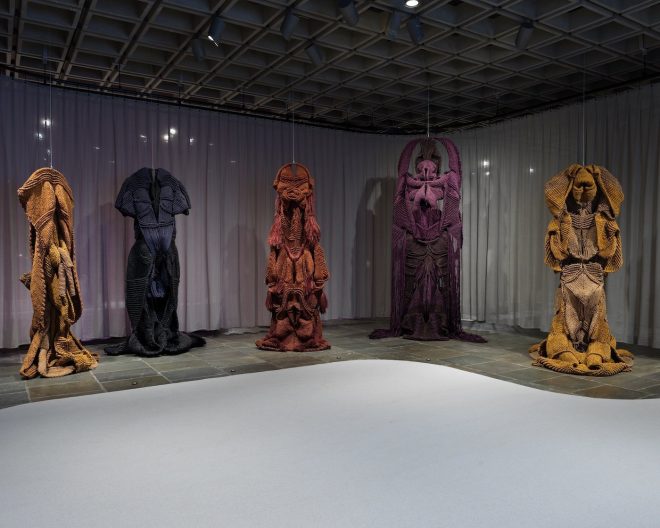 An Indian Master of Fiber, Clay, and Bronze

In her fiber sculptures, Mrinalini Mukherjee achieved an alchemic relationship between materials and process, fusing abstraction and figuration to indelible effect.

The revelatory genius of the late Indian sculptor Mrinalini Mukherjee (1949-2015) is laid bare in Phenomenal Nature, currently on at the Met Breuer, New York, where more than 50 sculptures made of fiber, clay, and bronze spanning the artist’s 40-year career are on display. Morphing vegetal, animal, and human elements, they range from the embryonic to the totemic in an exalted realm of myth and fantasy.

Organized by Shanay Jhaveri, the Assistant Curator of South Asian Art, and designed by Alejandro Stein, the exhibition is augmented by an unconventional display, which includes a pale grey stage curtain that snakes through the museum’s third-floor gallery, in front of which most of the sculptures are placed. The installation emphasizes an anti-formalist position, in which the works are placed democratically next to one another, and directly on the floor without a base.

The absence of written and archival material, not to mention solid walls as barriers separating the various phases of the artist’s work, feels disorienting, but the sheer tensile strength of Mukherjee’s intricately woven universes exerts a stupendous, spellbinding rapture nonetheless. The fiber sculptures, Mukherjee’s forte, are the most brilliant things in the show.

They are also are something of a rarity, since the artist exhibited infrequently during her lifetime. It’s thrilling to see so many of them in one place. The first ones we encounter, lined up like sentinels along the right side of the gallery wall, are among the earliest wall hangings that Mukherjee made in the early 1970s, when she was still perfecting her craft. They include “Squirrel” (1972), her first signification of an animal form. Composed of carpet brushes, loosely hanging jute, and a crocheted head, it is less an attempt at naturalistic rendering than a nod to the animating forces of nature and the natural world, which were of chief importance to the sculptor. Through an alchemic relationship between materials and process, she fused abstraction and figuration to indelible effect.

As Mukherjee’s confidence and skill with fiber grew, her works crept off the walls and began to stand as totems, usually affixed to the ceiling to keep them upright. In her last fiber works (five of which are in the exhibition), she found a way to create freestanding sculptures in fiber. In the ‘90s Mukherjee stopped working with fiber altogether and turned to ceramics, until a lack of facilities made it impossible to continue. Her final phase of work, from the 2000s, culminated in gorgeous patinated bronzes that hark back to a prehistoric age. Tragically, she was hospitalized on the eve of a major retrospective exhibition at the National Gallery of Modern Art in New Delhi in 2015, and died a few days later at the age of 65.

Mukherjee spent her childhood between the rustic landscape of Santiniketan where her father, the legendary scholar-artist Benode Behari Mukherjee, taught at Visva Bharati University (the brainchild of polymath Rabindranath Tagore), and the foothills of the Himalayas in Dehradun, where her mother, Leela, also an artist, taught at an all-girls’ school. She went on to study painting at Maharaja Sayajirao University in Baroda and found an indispensable mentor in K.G. Subramanyam.

Subramanyam, a former student of her father’s, was known for championing the “living traditions of India” over the authorial signature of Western Modernism. He encouraged the young Mukherjee to use alternative techniques and materials, which may have been the push she needed to get out of the studio.

The sculptor first worked with natural fibers at craft fairs organized by the university, which brought her into contact with local artisans. Although her earliest works are open-warp variations of the coarser wall hangings sold commercially at the fairs, from early on, Mukherjee rejected the traditional loom in favor of makeshift frames and armatures on which she knotted and entwined various fibers by hand, which liberated her works from the wall. She adapted the macramé technique, varying the layers and densities of jute, hemp, and other fibers to alter textures and volumetric impressions.

Mukherjee continued working with fiber after moving to New Delhi in 1972. She married the young architect Ranjit Singh, who became her close collaborator. Among other things, he would draw up elaborate instructions for the painstaking installations of her woven sculptures. Mukherjee, on the other hand, worked intuitively, never making a preparatory drawing or sketch. Instead, she allowed the fiber to form a generative syntax of its own through its warp, weft, bulk, heave, drape, and knots. Sourcing local fibers from Delhi markets, she later added dyeing processes to achieve magnificent chromatic effects.

In New Delhi, Mukherjee had encountered the Modernist painter Jagdish Swaminathan, whose proclivity for mysticism and the metaphysical counterbalanced the didacticism and pedagogy of her other mentor, Subramanyam. Mukherjee, in her words, quoted in the catalogue (which is definitive and excellent), wanted to transpose “the feeling of awe [you get] when you walk into the small sanctum of a temple and look up to be held by an iconic presence.” Her closeness to the older artist, who became a father figure, embellished her work’s spirit of joyous anarchy. It’s still not common to see this level of unbridled sexuality in contemporary Indian art, let alone in Mukherjee’s generation.

Although all the fiber works are truly extraordinary, the freestanding “Woman on Peacock” (1991) bedazzles with the replete majesty of Mukherjee’s technical inventions and image repertoire. A darkened, grimacing Kali-esque warrior rides atop a peacock, whose head — woven in indigo, charcoal black, and forest green — bears a resemblance to the head of a phallus at the moment of ejaculation. The figure’s chest is a masterpiece of folds, knots, and ribbing, which is split open down the center into an ellipse. Her mouth opens into a groan.

Around this time, Mukherjee ceased making fiber works. The rope she was accustomed to using was being diluted with synthetic fibers in the market. Furthermore, a ban on her preferred dyes restricted her use of color, and the rigorous labor required to make these works — each one could take up to a year or more — asked too much of the aging artist.

Clay, the medium she turned to after fiber, offered new tactile possibilities for Mukherjee, who added her own technical innovations. “Lotus Pond” (1995) is a marvelous arrangement of 13 terra cotta components arranged on a structure of red sandstone brick. Bulbous, sexual forms with tubular, domed, and petalled protrusions resemble a Lilliputian army of otherworldly beings. Where the artist added an iridescent glaze, the shapes are transformed into efflorescent flora and fauna that appear to concomitantly expand and contract.

Two residencies at the European Ceramic Work Center, in 1996 and 2000, enabled Mukherjee to approach the grandiose ambitions of her fiber sculptures. She produced the large “Night Bloom” (1999-2000) figural ceramic works, four of which are in the current exhibition. These mysterious, cloaked idols construed of folds and flaps feel wildly improvisatory and classical at the same time. Afterward, the lack of technical facilities prevented the artist from further explorations with ceramics, and she turned her attention to bronze, her last hurrah.

The bronzes, unlike the fiber works and ceramics, never attempted figural references. Instead, they fall into two distinct categories of nebulous mounds and shafts. The lost wax process Mukherjee adapted for the creation of these works engendered a further loss of control, and she appears to have reveled in the newfound freedom of unrestrained abstraction. With their imbrications of leaves and grooved and pitted surfaces, these gorgeously patinated works, bearing names like “Palm Scape,” “Cluster” and “Memorial,” evince fossilized remnants and throb with primal energy.

The ceramic and bronze works are truly delightful experiments from the inimitable hands of a master, but it is the fiber sculptures that most emphatically distinguish Mrinalini Mukherjee as not only one of the most exciting artists of Indian Modernism, but as an artist who transcends generational and cultural associations to stand in a class of her own.