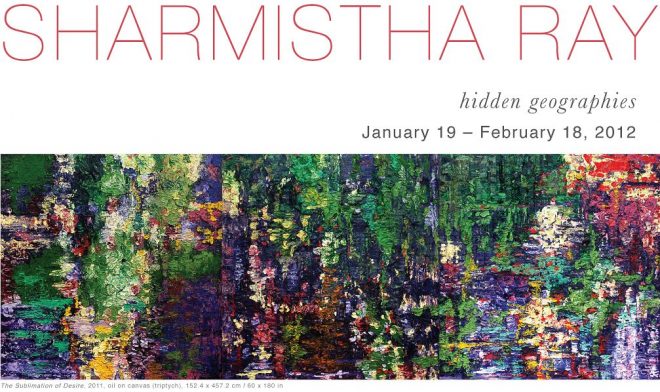 In this body of oils on canvas, Ray postulates canonical ideals of beauty and the sublime by distilling her memories, photographs, observations and experiences of landscapes, both urban and natural. Her painterly idiom combines an unconventional color palette with a dense network of gesture, impasto and layering techniques that is direct, emotive and visceral. Process is key and the varying viscosities and uneven layering of paint creates cracks, crevices and ridges, exposing the painting’s substratum in areas, while obliterating it in others. Paint is poured and mixed in thick folds onto the surface of the canvas so that it striates, streaks and eddies, producing imagistic manifestations of natural and organic phenomena like foliage, riverbeds and sky. At other times it is painstakingly applied with a palette knife in small segments across the expanse of the canvas, to construct fragmentations. Objects appear to dissolve at their edges just before concretizing into form, reconfiguring the relationship between materiality and abstraction.

Broadly referencing historical styles like Romanticism and Impressionism, Ray’s work also speaks to the lyrical agency of female vanguard painters like Joan Mitchell and Helen Frankenthaler, for whom color was based on subjective, empirical methods rather than objective, theoretical systems. Yet, hers is an opposing paradigm to the construction of the Western art historical ideal, evident for instance in her choice of color, and the positioning of dense patterning. The metascapes of Sharmistha Ray are suspended in time between mythos and reality, between abstraction and its opposite, exposing an intimate and charged topography of the subconscious mind.

Born 1978 in Kolkata, India, Ray lived in Kuwait before moving to the United States in 1997. She holds a dual degree from Pratt Institute (M.F.A. in Painting / M.S. in Theory, Criticism & History of Art), and is a recipient of the Joan Mitchell M.F.A. Grant (2004). Ray held directorship positions at Bodhi Art and Hauser & Wirth, before returning full-time to painting. She lives in Mumbai.