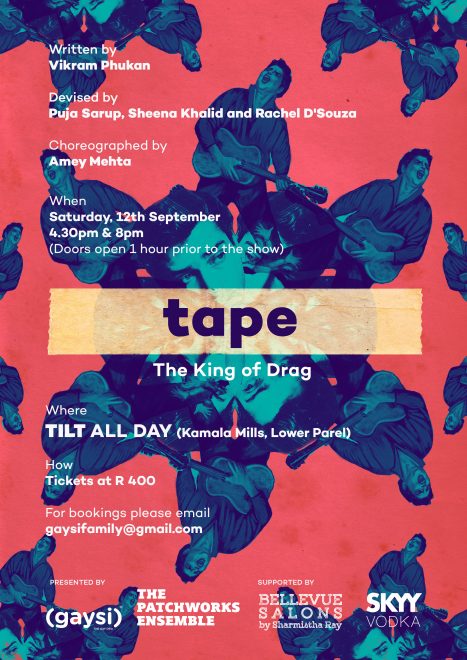 TAPE is a performance piece written by Vikram Phukan and created for the stage by Puja Sarup and Sheena Khalid of The Patchworks Ensemble. In its initial run, the play will be produced by The Gaysi Family, and staged at intimate venues, and may occasionally cater to an all women crowd. The first two performances will be held at Tilt All Day, on 12 Sep, at 4:30 PM and 8 PM. This performance will be the first drag king show of its kind in India. Drag kings are essentially female (and sometimes male) performers who inhabit overtly masculine personas. An underground Indian urban club scene will provide the setting for a drag show where the performer (played by Sarup) recreates the classic Shammi Kapoor persona replete with the 60s star’s foppish mannerisms and overwrought style that is so redolent in production numbers from his films. The musical vibe is 60s era filmi surf rock, but the play is set in a contemporaneous milieu. The ‘show within the show’ will be offset by realities faced by drag performers, especially in an India where alternative modes of expressions are being increasingly outlawed. A psychological portrait of the performer, with its complexities, will be interspersed with comic & musical interludes. The play will include references from popular culture (including Hindi film, which has a tradition of female drag). The staging will be minimalist, with two performers essaying multiple parts. The performance will include both text and choreographed movement. The initial showing will tentatively be performed in two acts of 40 minutes each, separated by an interval of 15 min.

Puja Sarup has been active in theatre since 2003. Her stage credits include Hamlet – The Clown Prince (for which she won the META award), S*x, M*rality & Cens*rship, All About My Mother & Grey Elephants in Denmark. She has been associated with the French theatre companies, Footsbarn and Buchinger’s Boots. She was awarded the 2010 Vinod Doshi Fellowship, and the J N Tata Scholarship in 2011 that funded a 3-year movement theatre course (based on the Lecoq pedagogy) in Helikos in Florence, Italy.

With Sarup, Sheena Khalid is the co-founder of The Patchworks Ensemble. Their first production Ila opened in 2014. She has completed a full-time 2-year course in Theatre at the London International School of Performing Arts. She has recently devised and performed Once Upon An Appletide. Other works include the site-specific projects Importance of Being Earnest and The Weird & the Wonderful with Yuki Ellias. Sheena teaches drama workshops for both adults and children.

Vikram Phukan runs the theatre appreciation website, Stage Impressions. His work as a playwright includes Stories in a Song, Limbo, an Indian adaptation of Arthur Miller’s The Price, and an upcoming play based on the life of Begum Akhtar. His directorial debut, Those Left Behind Things, a play on Iranian asylum seekers, is slated to open in 2016. Since 2011 he has worked as a stage critic for both online and print publications.

Founded in 2008, Gaysi Family is a social platform for all desi-identifying LGBTQ people. Its widespread readership and contributor base is spread across India, Australia, UK, France, USA, Canada and beyond. Since 2012 Gaysi has been curating and hosting events with the creative spirit in mind — the popular Dirty Talk (an open mic event), Read Out Loud (book readings), 2×2 Talkies (film screenings), and trivia nights. The Gaysi team comprises Anuja Parikh, Priya Gangwani and Sakshi Juneja.

SKYY VODKA, the number-one premium vodka made in America, was born with the belief that everything can be made better with a little fresh thinking. For decades, SKYY Vodka has partnered with LGBT events, festivals, and organizations. Since 2014 they’ve worked hand-in-hand with Freedom to Marry to develop ways to help our friends, families, colleagues, and communities win the freedom to marry nationwide.

Our venue partner is TILT ALL DAY, the café-diner-lounge bar hybrid in Lower Parel, who has previously hosted an edition of Gaysi’s Dirty Talk.