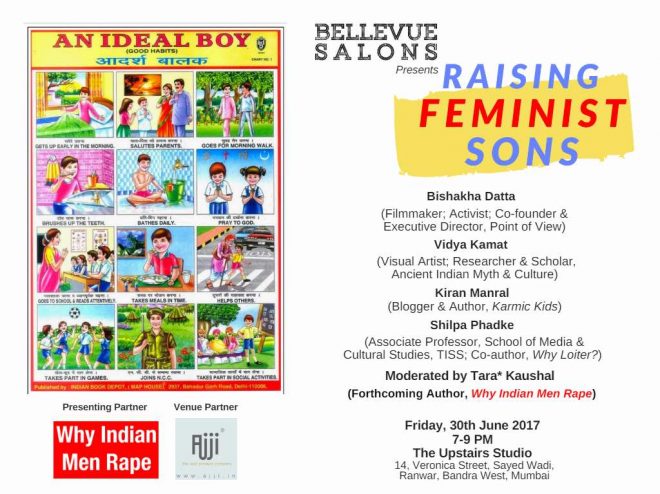 The tenth edition of Bellevue Salons, conceptualized, curated and arranged in partnership with Tara* Kaushal (forthcoming author, Why Indian Men Rape), brings together experts that weigh in on the virtue of raising feminist sons. The salon will be held at The Upstairs Studio (located at 14, Veronica Street, Ranwar, Bandra West) on Friday, 30 June at 7 – 9 pm.

From early development, boys in India are raised with a deep sense of entitlement. The gender privilege manifests itself at every strata of our society, regardless of class, caste or creed. From the politics of birth and the incessant quest for a male child, gender privileging continues through childhood–through food politics, the right to education and play, and religious and cultural rituals that enforce the gender paradigms of inequality and difference.

While these inequalities have a massive impact on the psyche and reality of women in society, it affects men too. Restricted by gender norms, boys are often discouraged from displaying nuanced emotions and developing empathy; from pursuing non-traditional roles and asking for help when they need it. De-stabilized by an ego-driven self and the inability to connect deeply with others, these boys enter adulthood with malignant attitudes that can become a breeding ground for hostility and violence.

Spanning three major ethnological norms—of the home and childhood, education and society, popular culture and religion—we will focus on systemic failures and corrective measures to reimagine masculinity and manhood from its childhood source. The need for such a discussion stems from the greater need to stem gender violence in all its forms, from microaggressions to rape culture.

Shilpa Phadke (Associate Professor, School of Media and Cultural Studies, TISS; co-author, Why Loiter?) Shilpa is a sociologist, researcher and teacher. Her academic pursuits include gender and the politics of space; the middle classes; sexuality and the body; and feminist politics among young women-specially feminist mothering and the position of young men on the streets of Mumbai. She discusses the engendering and creation of binaries in childhood through toys, media and education.

Bishakha Datta (Filmmaker; Activist; Co-founder & Executive Director, Point of View) Bishakha has worked with non-profit organizations around the world and was first Indian on the board of Wikimedia. She currently runs the Mumbai-based non-profit Point of View of women through a creative and sustained use of media, art and culture. At the intersection of gender and sexuality, she discusses children’s understanding of each other bodies, and consent and relationship dynamics.

Vidya Kamat (Visual Artist, Researcher & Scholar, Ancient Indian Myth &  Culture) Vidhya has been engaged in teaching and designing courses on comparative mythology for many years. She is a co-founder of Talking Myths Project, an online archive on traditional tales from the Indian subcontinent, and is a Founder Member and Secretary of Center for Study of Mythology and Culture. She talks about gender roles within religious texts and how they translate into legal practice and daily life.

Kiran Manral (Blogger & Author of Karmic Kids) Kiran has written seven books across genres, as well as short stories. She currently writes a column on feminism at SheThePeople.tv and has been a columnist on sexuality at DNA and on gender issues with Tehelka. As a parenting columnist at yowoto.com and as the mother of a 13-year-old boy, she has found that her biggest battle is to undo pop cultural and peer enforced conditioning, at home.

Tara* Kaushal (Forthcoming Author, Why Indian Men Rape) Why Indian Men Rape is a multimedia gender journalism and activism project where Tara* and her team explore the ethnological causes of sexual violence in the subcontinent. Her preliminary research has indicated that solutions to toxic masculinity and patriarchy lie in boyfriend, where negative attitudes must be corrected from the start.

Why Indian Men Rape is a multimedia gender journalism and activism project that spans two books, a documentary and an active online presence, to thoroughly explore the gamut of unique ethnological reasons—social, cultural, traditional, legal, economic, geographic, religious, psychological, etc—that cause sexual violence in the subcontinent.

The Upstairs Studio A place filled with ideas, art and design, this 150-year-old restored heritage bungalow is tucked away in a quaint village in Bandra, Mumbai. The Upstairs Studio is a workspace during the day, and also houses Washington’s design innovation brand Ajji – The Odd Product Company. By night, the studio turns into an itinerant cultural hub for curated evenings that are about people and quality mixed with a healthy dose of irreverence.