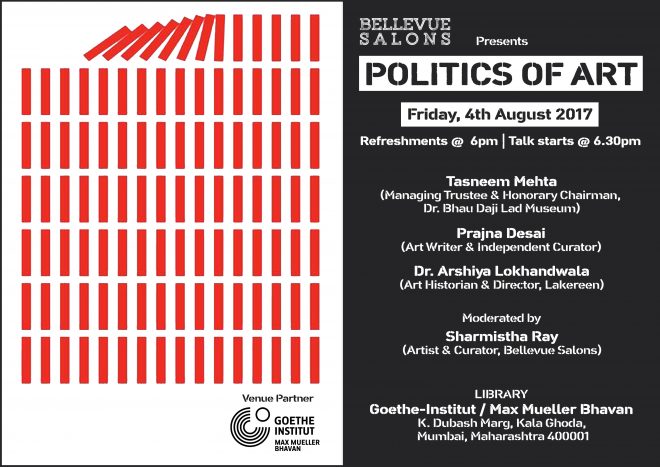 Does art still have the potential to disrupt society? We are pleased to announce the eleventh edition of Bellevue Salons on Friday, 4th August, 6-8pm at the Library, Goethe-Institut / Max Mueller Bhavan, K. Dubash Marg, Kala Ghoda, Mumbai 400001.

POLITICS OF ART brings together three prolific curators in conversation with Sharmistha Ray (Artist & Curator, Bellevue Salons) to address the politics of art in current times. The conversation will address three key areas: the political aesthetic, the nature of censorship and the role of the artist-citizen in troubling social climes.

Tasneem Zakaria Mehta is the Managing Trustee and Honorary Director, Dr Bhau Daji Lad Museum, Mumbai; Vice Chairman, Indian National Trust for Art and Cultural Heritage (INTACH) and Convenor, Mumbai Chapter. She is also an art historian, writer, curator, designer and cultural activist who has successfully pioneered the revival and restoration of several cultural sites in Mumbai. She conceptualized, curated, designed and implemented the restoration and revitalization of Dr Bhau Daji Lad Museum which won UNESCO’s 2005 Asia Pacific ‘Award of Excellence’. The Museum is considered an important cultural hub and platform for showcasing both contemporary and historic exhibitions. Mehta is a trustee of the Kochi Muziris Biennale Foundation and a member of the International Council of the Museum of Modern Art (MoMA), New York.

Prajna Desai is an independent writer and curator based in Mumbai, India. Drawn to intellectual history and methodology, her art writing and curatorial work are informed by how standards of aesthetics are developed, canonised, and fossilised, and challenges these modalities by exploring fringe and/or overlooked practices, or positions that shift the intellectual centre of gravity from Euro-American to Asian perspectives. Her most recent projects concern the social role of art as expressed through censorship debates in Japanese contemporary art. Prajna graduated with a PhD in the History of Art from Yale University and has previously taught at Stern College for Women and the University of Southern California.

Dr Arshiya Lokhandwala is an art historian based in Mumbai, India. She is also a curator and the founding director/curator of Lakeeren, a pioneering gallery for political and feminist art in Mumbai. Her recent museum curatorial projects include “Given Time: The Gift and Its Offerings” at Gallery Odyssey, Mumbai, 2016; “After Midnight: Indian Modernism to Contemporary India 1947/1997″ at the Queens Museum, New York, 2015; and “Of Gods and Goddesses, Cinema, Cricket: The New Cultural Icons of India” for the RPG Foundation, Mumbai; and “Against All Odds: A Contemporary Response to the Historiography of Archiving, Collecting and Museums in India” at the Lalit Kala Academy, Delhi, 2011. Arshiya graduated with a PhD from Cornell University.