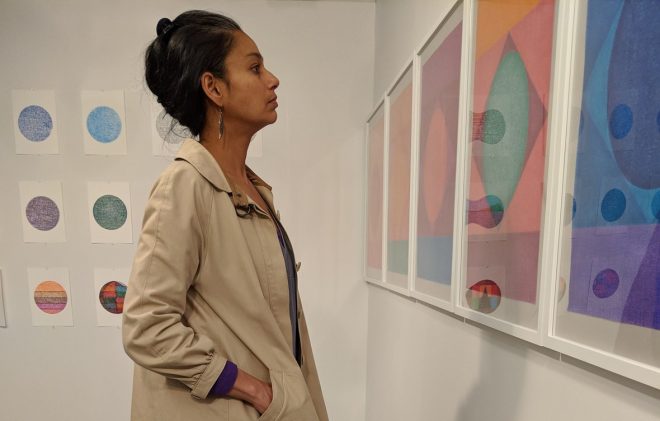 In the final two weeks of October, there seemed to be a shift of focus in the 13thedition of Asia Contemporary Art Week’s (ACAW) exhibitions in New York. Beginning on 15 October with Kuwaiti artist Monira Al Qadiri’s evening of film and conversation with Assistant Curator Sophie Cavoulacos at The Museum of Modern Art (MoMA), the fortnight’s shows might best be described as improvisational, with an emphasis on the act of art-making itself. Many of these artists from South Asia, the Middle East and East Asia pushed boundaries beyond convention to invent their own standards of quality.

For peripatetic Al Qadiri—who was born in Senegal, raised in Kuwait and then spent a decade in Japan before moving to Lebanon—varied cultural experiences and childhood memories inform a range of scenarios used to consider the past and future of petrocultures. Often cross-dressing in films such as Abu Athiyya(Father of Pain) (2013), and modulating her own voice in gender-fluid roles, Al Qadiri’s childlike but wry depictions, mingled with poetry and song, lament the loss of local culture. In other videos like Soap (2014), scenes from local soap operas laced with dark humour subtly decry issues of labour and hyper-capitalism in the Gulf. In her most recent video The Craft (2017), childhood recollections of the secrecy surrounding her parents’ employment in the Kuwaiti embassy were presented as an alien conspiracy. In the video, abductions and a spaceship resembling an American diner reflected the ubiquity of American culture in the Middle East during the artist’s childhood. In her conversation that evening, Al Qadiri discussed the significance of animation, cartoons and bizarre settings to depict the effect of oil heritage and technology on the erosion of history.

On 17 October, Umber Majeed’s solo exhibition at RUBBER FACTORY’s cosy space on the Lower East Side featured a similar kind of hybridity. Titled In the Name of Hypersurface of the Present, videos, sculpture and works on paper explored Pakistan as a Muslim nuclear state. Majeed’s work was best exemplified by her video Atomi Daamaki Wali Mohabbat (The Atomically Explosive Love) (2017–ongoing), which references Chaghi Monument Hill—a destroyed military monument—and Youm-e-Takbeer—a national holiday—accompanied by the voiceover of a fictitious Urdu poet and texts such as ‘Thank you Allah for giving us nuclear deterrence so we can live with head held high in the community of nations’, reflecting on the deconstruction of Pakistani nationalism and militancy.
These notions of experimenting and creating new forms and structures continued later that evening when participants were soothed by Satya Hinduja’s unusual soundscapes (Alchemic Sonic Environments). Set up not far from Times Square in the plant-filled, candlelit surroundings of her high-rise apartment, with hot herbal tea readily available, the hour-long immersion in different frequencies of sounds gratified many people, some of whom described the experience as regenerative. Hinduja’s training at the Berklee College of Music, combined with her experience of scoring films in Mumbai and interest in kinesiology, led to what she describes as a ‘life mission to educate people about the importance of frequencies and the subconscious’.
Altering perception was also the focus of Seulki Ki’s exhibition, Theater Near Me, which opened at DOOSAN Gallery on 18 October. Ki’s installation of photographs featured body parts—for example, a prostrate figure’s arm being pulled or an oddly twisted torso. Such works convey a sense of movement despite being stationary. By contrast, other works—such as Ki’s photographs of blurred hair—were frozen in time such that they appeared to be forever stationary. This interchanging sense of mobility and immobility—referred to as ‘temporal continuity’ in the press release—expanded one’s perception of time and space beyond the image.
In the same evening, Bahareh and Farzaneh Safarani’s exhibition Reincarnationat Elga Wimmer PCC compelled a different kind of response from the audience. Emotive painted self-portraits combined with video projections showed a day in the lives of the twin Iranian sisters, and dwelled on the notion of womanhood. Often depicted alone in empty rooms peering through curtains or lying on the floor, their formally painted and sombre-yet-dignified images conveyed an enormous weight on the artists’ shoulders. The subtle projection of moving curtains and swinging clock pendulums onto the paintings only enhanced their unease, making the room and the thin transparent drapes seem like symbols of imprisonment as well as spaces of freedom from the burdens of the world. These mysterious and curious icons drew in viewers—and their effect was attested to by the sale of at least one third of the paintings on opening night.

Saturday 20 October featured ACAW’s much-awaited Thinking Collections: Open Studios at the Elizabeth Foundation for the Arts. Armita Raafat, Tamiko Kawata, Sharmistha Ray, Mahmoud Hamadani and Cecile Chong were a few of the artists who provided first-hand explanations about their inventive techniques that day. Raafat described the process of making her rough-hewn hexagonal sculptures—inspired by decorative Islamic architecture known as muqarnas—with materials like Styrofoam, cardboard and fabric, while Kawata’s studio revealed how mundane objects like safety pins could be used to conceive wondrous sculptures of beauty. In Ray’s work, we saw up close how her obsessive 50-hour word-upon-word drawings with multicoloured pens gradually became luminous spiroglyphic-like tantric shapes, and we observed Hamadani proudly detail his self-taught technique of manipulating poured paint on paper to create large, spare and architectural configurations. In Chong’s layered encaustic paintings filled with objects such as metallic leaf, rice paper, beads and ash, one related to the way her opaque tiers appeared to mimic the layered complexity of life itself.

Later that evening on the Lower East Side, Ulterior Gallery’s video exhibition honoured the late Japanese artist Minoru Yoshida’s mid-1970s performances in New York. A member of Gutai, Yoshida’s creation of an extraterrestrial electronic sound-emitting costume that represented his feeling of alienation in New York would come to be revered for its originality. This notion of feeling like an outsider in a foreign country was also reflected in Zarina Hashmi’s works on paper in her solo exhibition, which opened at Luhring Augustine in Chelsea on the 26th. Hashmi’s much-sought-after abstract works filled with grid-like distilled floorplans of a home are often considered the precursor to a generation of artists whose work was permeated by transience.

At the end of almost a fortnight, I was reminded of Robert Linsley’s essay ‘Improvisation in Abstraction’. In it, Linsley discusses how improvisation, even if it’s not completely original, ‘enable[s] the possibility that the new will appear’. The idea that cumulative changes facilitate new strides became increasingly apparent in almost all the exhibitions I saw. Whether it was Seulki Ki’s theatrical experiments with movement, the Palestinian artist Samia Halaby’s talk at the Solomon R Guggenheim Museum on 23 October about the development of her abstract paintings, or the dialogue between contemporary Thai abstract painters and Abstract Expressionists in the exhibition The Thick Lines Between Here and There at Owen James Gallery, what was most cemented in my mind was, as Linsley so accurately pointed out, that ‘new art aims to invent its own standards of quality, and this is how improvisation acquires superlative importance.’ —[O]

Go to Ocula.com for the original here.