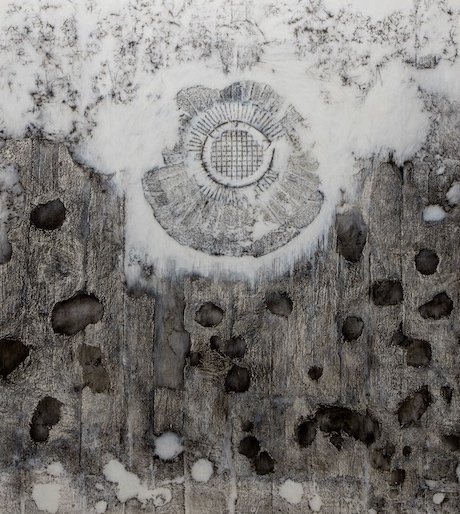 When the Arts Resist Imperialism

A resplendent display of 272 fuchsia-colored paper lotus lanterns adorns the light-filled oculus on The Rubin Museum of Art’s top floor. The sweeping circular installation, “Lotus: Zone of Zero” (2019) by Kimsooja, is among the more striking of the works by 10 international artists selected by guest curator Sara Raza for the exhibition Clapping with Stones: Art and Acts of Resistance.

Raza’s show, while addressing the far-reaching effects of Western neoliberal imperialism, focuses more on the remedial nature of artistic resistance, and even celebrates it. The lotus flower, an iconic Buddhist motif prevalent throughout Asia, symbolizes enlightenment and rebirth. The flower grows in the mud, emerging from it perfect and whole. For a world in the grip of seismic political, social, and ecological upheavals, it’s an uplifting metaphor.

Like Kimsooja, the artists in the show come from everywhere and live, mostly, elsewhere. Kimsooja was born in South Korea. Shahpour Pouyan, in Iran. Nari Ward, in Jamaica. Pallavi Paul, in India. Hank Willis Thomas, in the United States. Lida Abdul, in Afghanistan. Nadia Kaabi-Linke, in Tunisia. Naiza Khan, in Pakistan. Kader Attia, in France. Ibrahim Qureshi, in Kenya.

Their cosmopolitanism establishes a global network of artist-activism, while also suggesting a link between forms of displacement and the culture of protest after World War II, which has shaped modern geopolitics. From wide-ranging sources that include military intelligence, pre-modern architecture, diasporic histories, and documentary evidence, these artists borrow plentifully from cultural memory to destabilize embedded notions of power in works that span photography, sculpture, performance, and film.

Kimsooja’s work is flanked on the right by a splendid piece by Shahpour Pouyan, “My Place is the Placeless” (2016-2019), which comprises 15 ceramic domes, miniature replicas of architectural variations found across Asia, juxtaposed within a raised glass vitrine. These domes, rendered in shades of bone white and gray, are redolent of Islamic and Buddhist styles from different time periods.

Pouyan discovered he had ethnic ties to countries beyond his native Iran as a result of a DNA test he obtained in 2014. His domes represent the indigenous architecture of these countries, which include Scandinavia, Central and South Asia, and the Middle East, as well as multiple religious genealogies. The idea of origins is further expressed through the artist’s use of ash, which spills delicately out of some of the domes, doubling them up as containers of history.

Pouyan’s work, which takes its name from a line of a poem by the 13th-century Persian scholar, Rumi, unmasks the fiction of nationhood and critiques the legitimacy of racial purity in neoliberal agendas, not only in the political [or wider] world, but in the Euro-American art world too, which routinely tokenizes artists according to their race and cultural origins, in order to marginalize them.

Conversely, it also raises compelling questions about social and communal bonds established along ethnic and religious lines, which in their extreme form can be just as toxic. Xenophobia and forms of religious fundamentalism, for instance, that have driven ethnic cleansing and genocidal progroms throughout history, are based on the fallacy of purity.

The artist received updates to his DNA test in 2019, which revealed discrepancies with the initial test and even more far-flung ancestral underpinnings traceable to East Asia. The findings have been documented through new domes in the display that feature Manchuria, Korea and the Caucasus Mountains.

Nari Ward also explores complex questions of belonging in the installation “Breathing Room” (2019), which is tucked inside a nook in a corner. The elaborate display recreates a period room and consists of furniture that the artist, who lives in New York, found in antique and thrift stores in and around Harlem, including a freestanding grandfather clock, rug, dining table, chair, side table, and stacks of used American textbooks sitting atop the tables. A Central African wooden reliquary figure from the Fang ethnic group is placed inside the clock.

Both the clock and books are adorned with a West African diamond-shaped cosmogram created by drilling holes into a wooden disk and adding conjoined circles formed by copper nails, which Ward calls ‘breathing holes.’ They reference an escape tactic used by 19th-century slaves in Savannah, Georgia, who hid under the floorboards of a church which were punctured with similar patterned holes, allowing them to breathe. Above the installation, a surveillance mirror is installed, possibly to frame an analogy between America’s slave-trading history and the racial conflicts amplified by the political moment.

The ongoing horror of police brutality against African-Americans, not to mention, more broadly, the human rights crisis at the US southern border, carries traces of historical racism and bigotry. Still, Ward is hopeful: the other work by the artist in the show is one of his colorful text-based pieces. Constructed of shoelaces, it spells out “We Shall Overcome” (also the title, 2015).

These racial histories are also the subject of an impressively large photograph, “The March” (2017), one of two works by Hank Willis Thomas in the show. Its reflective ultraviolet surface, an ephemeral abstraction, is activated by the flash of a camera or smartphone, which reveals an archival photo of a sea of peaceful protestors.

The subject, the wall label informs, is one of the Civil Rights marches in the United States led by Martin Luther King, Jr., in 1965. Modern technology renders the subject visible — a mirror, perhaps, of how photography has been used to both document and advance social movements by bearing witness to trauma and action.

The title of the show, Clapping with Stones, comes from Lida Abdul’s short (just 5 minutes long) 2006 film, which features a group of men in the traditional attire of central Afghanistan, performing a pre-Islamic ritual of mourning in which they clap stones together. The performance was staged in the Bamiyan valley where sixth-century Buddha sculptures were destroyed by the Taliban, the extremist militia that rose to power chiefly with American support during the decade-long Soviet-Afghan War that started in 1979.

The destruction of the Buddhas bespeaks the way the effects of imperialism reproduce themselves in an indigenous population, in even more nefarious ways. “Burn the Diaries” (2014-2019) by the Indian artist, Pallavi Paul, provides another account of information that is destroyed in order to erase inconvenient truths. While conducting research in London, Paul came across the personnel file of Noor Inayat Khan, a World War II female British spy of Indian and American descent, in the official archives.

Parts of the original file, apparently laced with contradictions and omissions, is rendered on a monumental silk scroll, along with passages in Morse code. Seemingly raising questions about the nature of verisimilitude and the withholding of truth, the use of silk in Paul’s work is particularly interesting, in that silk and other fabrics were evidently used as espionage tools to encode messages during the war.

The Tunisian artist Nadia Kaabi-Linke also sources information from World War II archives for “Altarpiece” (2015), a large, stunning monochromatic ink and wax abstraction framed in a lavish 24-carat gold leaf frame. Taking the form of a Christian triptych, the three panels actually feature prints of bullet traces from a Nazi bunker. Kaabi-Linke’s lyrical abstraction, safely tucked within signifiers of affluence and prestige, yields to the horrors of war. A chilling reminder too, that the history of art is also the history of power.

Naiza Khan, like Paul, draws upon themes of gender and conflict, but as a social critique of patriarchal power in her native Pakistan, a complex postcolonial society. “The Robe” (2008) and “Armor Lingerie V” (2007), suspended in one of the museum’s open galleries, are sculptural metal works depicting women’s undergarments that powerfully evoke female sexuality and sensibilities. But their rendering in the hard steel of battle armor evokes combat and the impression that women are at war every day, through the sheer fact of their existence.

Clapping with Stones is a timely exhibition. We need alternate perspectives to create new narratives for history and culture more than ever. The strength of Raza’s show lies in its exploration of the formal possibilities and thematic potential of social justice in our times, with artists as the agents of our collective conscience. That it does so by arriving at hope, rather than leaving us in a hopeless rubble of despair, is a breath of fresh air.

Clapping with Stones: Art and Acts of Resistance continues at the Rubin Museum (150 West 17th Street, Chelsea, Manhattan) through January 6, 2020. The exhibition is organized by guest curator Sara Raza.