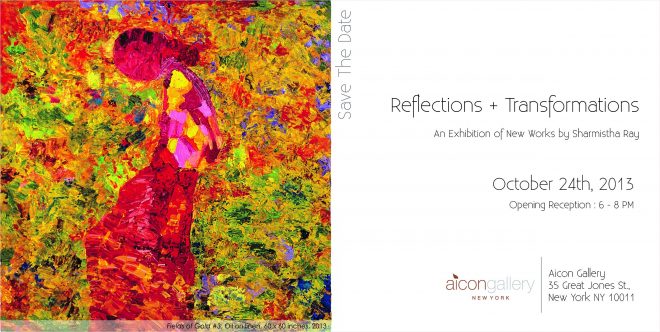 Aicon Gallery is proud to present Reflections + Transformations, an exhibition of recent paintings and drawings by Sharmistha Ray. The exhibition – Ray’s first solo in New York – explores the metaphysical emergence of the autonomous self in transitioning states between abstraction and the figure. For her last solo exhibition, Hidden Geographies, Ray alluded to intimate tonalities as a collection of subtle whispers tucked away under the thick skins of paint-laden landscapes. In Reflections + Transformations, those tonalities start to emerge more persistently, pushing their way through waves of abstraction. Alternating between layers of ambiguity and suggestion, the reflexive voice emerges at times in the form of naked flesh, while at other times remains figuratively buried under the paint.

Ray’s paintings are sites for multiple negotiations to probe the poetics of identity politics in continually shifting social and cultural parameters. Nomadically living between Mumbai and New York for close to a decade, the artist embeds a haptic sense of movement in her paintings that mirrors her physical journeys in real time and space. Grid-like structures that held paint in place here give way to more organic forms that morph into golden arcadias, beds of roses and a garden of crushed flowers. The self-reflexive voice vibrates within impasto layers of paint in City of Eros (2013), takes its form as abstracted female forms in the Fields of Gold paintings, wrestles with paint material in the Bed of Roses works and finds a tenuous resolve in A Place of Her Own (2013).

The lyrical undertones of eroticism pervading the painterly realms of Ray’s abstractions find their self-conscious charge in the States of Arousal drawings. The ubiquitous and solitary female nude depicted in graphic tones departs from the overt sensuality of the paintings, laterally entering into zones of realism to flesh out a narrative of carnal pleasure. The monumentalizing of personal intimacies, whilst finding their formal tendencies within western art history, have their rhetorical outflows from the more patriarchal and hetero-normative strictures of an eastern society where Ray spends most of her time.

Sharmistha Ray was born in Kolkata, and lived in the Middle East before moving to the United States with her family in 1997. She studied fine art and art history at Williams College and Pratt Institute and has been the recipient of notable awards and accolades including a Mont Blanc Young Artist Worldwide Patronage Commission (2012), a TED Fellowship (2009) and Joan Mitchell M.F.A. Grant (2004). Her works are in private collections in India, America, Italy, Singapore and Australia.